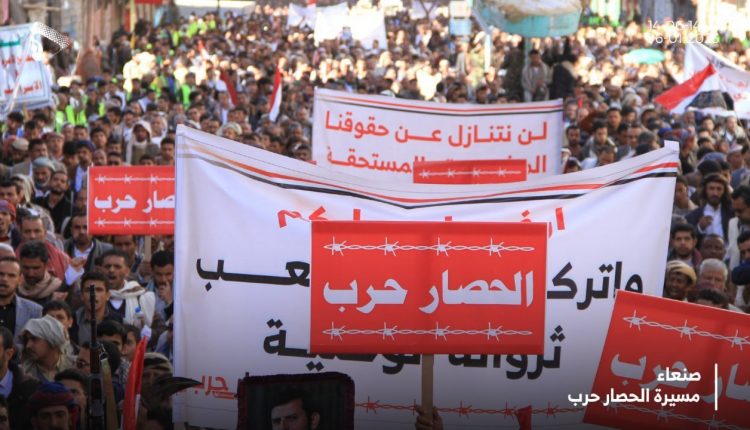 
Hundreds of thousands of Yemenis in Sana’a and a number of other provinces took to the streets on Friday, to demonstrate against the US-backed Saudi-led coalition blockade on Yemen under the slogan “Blockade Is War.”

The participants in the rally chanted slogans expressing their anger towards the US economic blockade on the Yemeni People, blaming the Saudi-led coalition for the continuation of the blockade.

A statement was issued during the rally in Sana’a by the advisor to the President of the Supreme Political Council, Muhammad Muftah. He warned that there would be consequences for countries involved in the ongoing war, including the blockade and preventing the entry of oil ships.

He stated that the blockade is an act of war that must be responded to with a military reaction that will affect and hurt the Saudi coalition in an unprecedented and unexpected way.

Muhammad Muftah stressed the need to lift the siege imposed on Sana’a International Airport, and warned against ignoring the demands of the Yemeni people to open the airport to flights, like all airports in the world.

The statement warned the coalition against continuing to refuse to pay the salaries of employees from the revenues of oil and gas wealth, which were looted and deposited to the Saudi National Bank. It stressed that employees’ access to their salaries are rightful dues, and that they would not accept derogation or compromise.

The statement pointed out that the suspicious deals done by the mercenaries with their operators are null and void, and that they are not recognized by the Yemeni people, including the deal to sell the port of Qishn, the oil sector and others, affirming that the sale of homelands is an illegal betrayal.

It affirmed the people’s standing with the leadership to take whatever decisions it deems appropriate to lift the blockade, calling on all Yemenis to have cohesion on the home front and to beware of the division sought by the enemies among society.

The statement stressed that Palestine is the Nation’s central cause, condemning the Zionist attacks on the Palestinians, the incursions and the Israeli’s desecration of Al-Aqsa Mosque. It called for a broad Islamic position that confronts Israel.

Most Prominent Points of Contention between Sana’a and Coalition