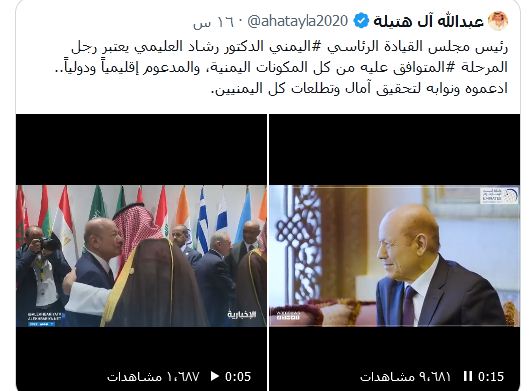 
A Saudi official revealed, on Saturday, that his country had dispensed with members of the Presidential Council loyal to it in southern Yemen.

This coincides with the intensification of the conflict between Riyadh and a number of members.

Abdullah Al Hatilah, assistant editor-in-chief of the official Saudi newspaper Okaz, indicated that his country has become dependent on Rashad Al-Alimi, whom he described as the man of the stage agreed upon by all Yemeni components, regionally and internationally, in reference to giving him a light by acting as president.

Al Hatilah’s tweet, who considered the most prominent theoretician of Saudi foreign policy, comes in light of a new crisis afflicting the authority of GNA, the most prominent of which is the rebellion of its members, especially Al-Aradah and Aidros Al-Zubaidi, who reject the plan to dismantle their factions and ending their political and military influence in Marib and Aden.

Saudi Arabia had already succeeded in neutralizing a number of members, most notably Faraj al-Bahsani, who dismissed him from the post of governor, and the commander of the second military, in addition to Abdullah al-Akimi, who was neutralized in Shabwah, not to mention Osman Majali, who is only has the position, there is only Tariq Saleh and Abu Zaraa Al-Mahrami, who are marketed by Saudi Arabia as deputies for the south and north.

Saudi Arabia is seeking to reduce the members of the authority it formed a few months ago; it has become a burden on it and warns from wide conflicts in its ranks.