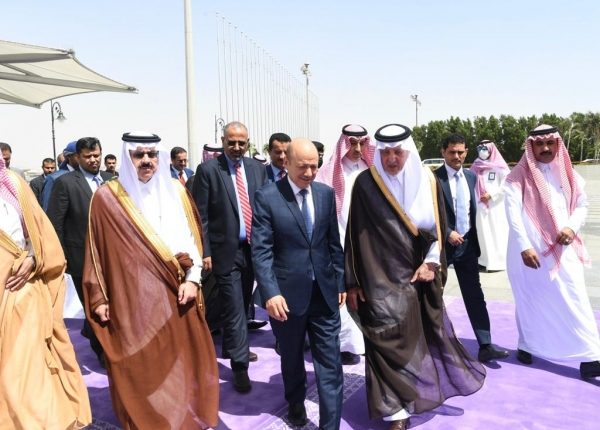 
Saudi Arabia and UAE agreed to neutralize more members of the Presidential Council, the authority loyal to them in southern Yemen, this coincides with developments that predict the situation is out of their control.

Sources in Aden government reported that the agreement stipulated the removal of the power centers held by Aidarous al-Zubaidi and Sultan al-Aradah.

Saudi Arabia has rejected the demands of Islah to release Alaradah, while UAE continues to prevent Al-Zubaidi from returning to Aden, despite the seriousness of the situation in their provinces.

Aden and Marib are witnessing developments in the context of the dismantling the military power and influence of Al-Aradah and Al-Zubaidi.

In Aden, the coalition continues to arrange the status of the most prominent stronghold of the transitional, both at the level of dismantling the council’s factions by merging them with defense and the interior ministry

or on the path of Tariq Salih’s delivery of the city’s insurance file, as for Marib, tensions have escalated between factions backed by the coalition and another tribal group that forms a center of influence for Al-Aradah, the governor of the province, the most recent of these is the confrontations between the forces belonging to Mufreh Buhaibah, the most prominent opponents of Al-Aradah and the militants of Al-Fajij tribe to which he belongs.

Tribal sources there reported that reinforcements for Buhaibah came from Al-Anad base in Lahij, it tried to station itself in the areas of Al-Fujij, in the Sun Temple, which sparked new confrontations between the two parties.

The new deployment of Buhaibah is part of the coalition’s arrangements to surround the most important incubator for Alaradah in preparation for the decision to dismiss him from the position of governor.

The neutralization of Al-Aradah and Al-Zubaidi comes after the coalition succeeded in neutralizing Abdullah Al-Alimi after the handover of Shabwah to his opponents, as well as Faraj al-Bahsani, who was removed from the position of governor and commander of the second military region in Hadhramaut.

According to government sources, the coalition is moving towards a presidential restructuring with regard to keep a president and two deputies for the North and the South,

it is expected that Al-Alimi will retain his position, due to his relationship with Saudi intelligence, Meanwhile, Abu Zara’a al-Muharrami, who was assigned the task of securing Aden, will be installed by the coalition, and he holds the position of Deputy Tariq Saleh, commanding the joint forces on the west coast from the south and Tariq Saleh, who is fighting the battle to overthrow what remains from Islah strongholds in Taiz and Marib, from the north.