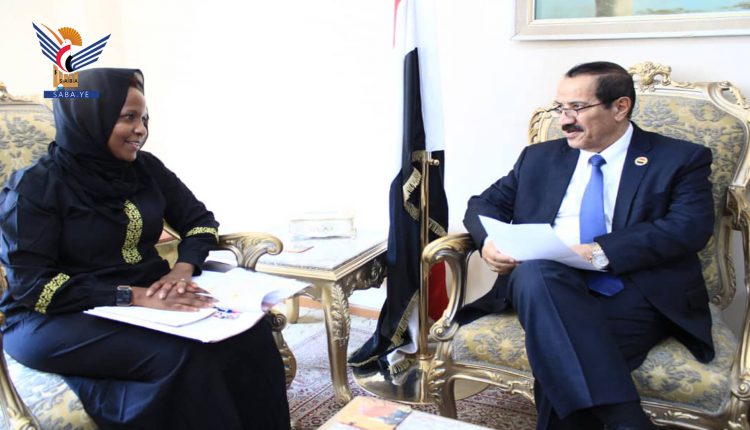 This came during his meeting today with the Assistant Secretary-General of the United Nations for Humanitarian Affairs and Deputy Emergency Relief Coordinator, Joyce Msuya, and her accompanying delegation.

In the meeting, Sharaf said that Sana’a is with the extension of the truce and the fulfillment of its requirements that the two coalition countries, Saudi Arabia and the UAE, know well, which include paying the salaries of the state employees and preparing to enter into peace negotiations. “But if the goal is to make the country live in a state of no war and no peace, then this is totally and completely rejected.”

He affirmed that Sana’a expresses the aspirations of millions of Yemeni people to achieve honorable peace away from any foreign tutelage or dictates.

The foreign minister pointed out that the continued detention of oil derivatives and domestic gas ships and not allowing them to enter the port of Hodeida, and the failure to open Sana’a airport completely and to more destinations increases the repercussions of the humanitarian catastrophe in all fields.

Sharaf called on the United Nations to increase the volume and allocations of its urgent humanitarian programs, including the provision of food, medical and cash assistance in light of the continuation of the war and the comprehensive siege.

Al-Nakhala: Anssarallah Will Have Major Role in Supporting Palestinian Resistance