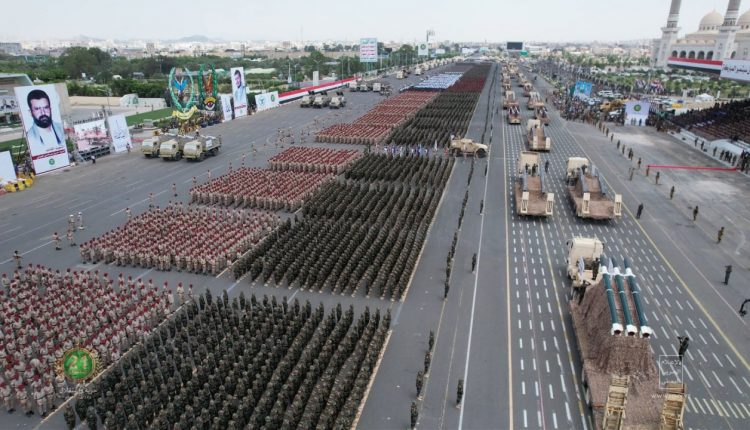 
The capital Sana’a witnessed on Wednesday a majestic youth military and security parade in celebration of the eighth anniversary of the September 21 revolution.

President of pro-Houthis Supreme Political Council (SPC), the highest ruling authority in Sana’a, Mahdi al-Mashat, attends the military and security youth parade on the occasion of the eighth anniversary of the September 21 revolution

The President of Sana’a SPC arrived at al-Sabeen Square aboard an armored vehicle belonging to the armed forces, one of the vehicles that the heroes of the armed forces seized it from the war field.

The military parade began with carnival performances on this national occasion, in the presence of members of the Supreme Political Council, presidents of parliaments, ministers, judiciary, Shura Council and Supreme Court, a number of members of parliaments, ministers and Shura, heads of government bodies and institutions and a large public presence.

Mahdi Al-Mashat, affirmed Sanaa’s great keenness on peace, calling the Saudi-led coalition to engage in practical confidence-building by the necessary steps on the humanitarian and economic sides.

He indicated to openness to all efforts and good endeavors and the exchange of addressing concerns and ensuring legitimate interests with our Arab and Islamic surroundings and all countries of the world.

In a speech made on the air on the occasion of the eighth anniversary of the September 21 revolution, Al-Mashat called on the war leadership on the other side to jointly move from war strategies and hostile policies to peace strategies.

He also called for the whole end to the war, siege and “occupation”, addressing the effects and repercussions of the war, noting the need for the international community, the Security Council and the United Nations to support serious and real peace options.

“The international community should immediately begin to modify the behavior that they have been doing as obstructing, frustrating and biased,” he said. The internationalist behavior never helps build confidence and achieve peace as much as it falls within the direct factors behind prolonging the war.”

Al-Mashat pointed out that the confidence-building steps are represented in the lifting of the blockade on Yemeni ports and airports, and the control of oil and gas resources and wealth to ensure the payment of salaries.

He stressed the importance of working to achieve the required and encouraging progress in the exchange of release of prisoners and bodies and the disclosure of the missing, stated Sanaa’s full readiness for immediate entry into the completion of this humanitarian step on the basis of all for all.