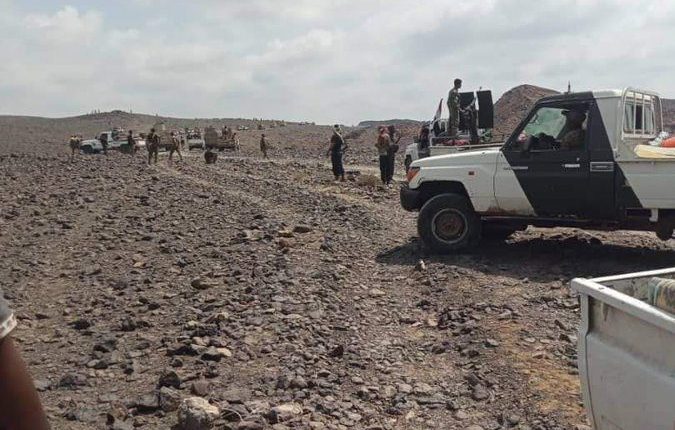 Agreement with al-Qaeda to Save STC in Abyan


The Southern Transitional Council (STC), which calls for the secession of southern Yemen, announced on Sunday that it had achieved new progress in the strongholds of al-Qaeda in the Abyan province, southern Yemen.

This comes after STC’s decisions to appoint leaders known to be close to al-Qaeda.

Media of the council calling for secession reported the incursion of its Emirati-backed factions into mountainous areas of Khobar Al-Maraqsha, one of al-Qaeda strongholds east of Abyan, and another carried out a deployment operation in Lauder district.

The progress of the New Transitional Forces came weeks after its stationed in Ahwar and Shaqrah, the last Islah strongholds, in the midst of negotiations conducted by the leaders of the Council with its opponents, including Al-Qaeda movement affiliated with Islah.

The STC anticipated its new incursion with appointment decisions, most notably the appointment of Wael Al-Jaari, who is close to the leader of AlQaeda, Tariq Al-Fadhli, commander of the security belt factions in the central regions of Abyan.

Al-Jaari had previously been expelled by the Transitional Council in the year 2021 from Aden, where he held a high security position.

Al-Jaghri was appointed commander of the security belt, which includes Al-Qaeda elements stationed in Lawdar, Al-Wadaa and Mudiyah, it means that the agreement allowing STC to show off in media, in exchange for handing over those areas, which the Transitional Council confirmed, according to the head of its popular circles in Abyan, Omar Harsh,

Al-Qaeda’s strengthening of its ranks, not to mention its acknowledgment on the inclusion of its elements within the strength of the Third Giants Brigade, affiliated with the Transitional Council, and whose forces are stationed in the central regions of Abyan.

The transitional is facing widespread criticism for what they describe as a “process text”, in a clear indication that the transitional forces stopped in Shoqra, where regular units were stationed.

Muhammad al-Hanashi, a journalist in the Transitional Council, called on the council to reveal the reasons for the failure of these forces, in continuing the “Arrows of the East” operation, which STC claimed was targeted by Al-Qaeda.