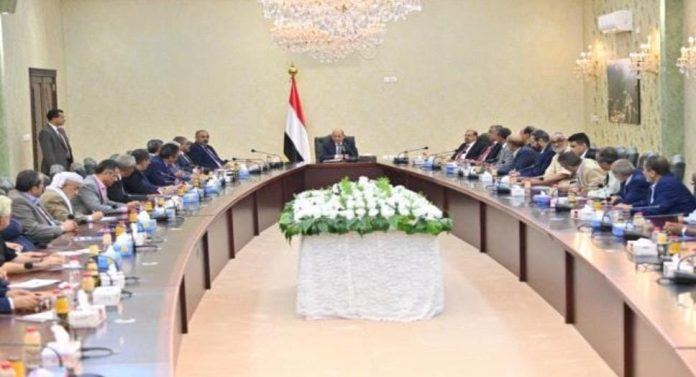 
Rashad Al-Alimi, head of the authority of the Presidential Council, intensified, on Tuesday, his moves in order to establish a new alliance to confront the growing influence of STC in southern Yemen.

Al-Alimi, who is currently visiting Saudi Arabia, held meetings with leaders of the first row in Islah party.

Diplomatic sources reported that the meeting that brought together Al-Alimi and leaders in Islah party, Abdul Razzaq Al-Hajri and Ahmed Al-Qumairi, he touched on the creation of alliances to support Al-Alimi in the face of Al-Zubaidi’s attempt to seize the decision within the Presidential Council.

Al-Alimi demanded Islah party to put pressure to return Abdullah Al-Alimi to the sessions of the Council to strengthen Al-Alimi’s rank.

The discussion centered on the demands of Tariq’s return to work by attending the presidential sessions, and in order to strengthen the confrontation of Al-Zubaidi’s seizure, supported by Faraj Al-Bahsani and Abu Zara’a Al-Muharrami, over the decision.

Tariq and Abdullah Al-Alimi have been interrupting the presidential sessions since the events in Shabwah, as Al-Alimi left for Cairo, while Tariq withdrew his parliamentary leaders to his stronghold in Mocha and Sultan al-Arada is in his stronghold in Marib. This fragmentation gave Aidarous al-Zubaidi an opportunity to strengthen the military and political influence of his Transitional Council.

Al-Zubaidi, who is chairing a presidential session, continued to raise the flag of Yemen alone, and a number of transitional sessions during which the flag of the south raised expand the spread of its military factions in eastern Yemen at the expense of its opponents in Islah party, ignoring Al-Alimi’s repeated directives to stop the confrontations.