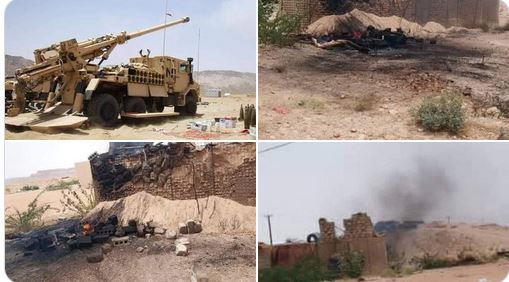 
The southern giant’s factions loyal to UAE installed a number of long-range cannons in the city of Marib, the last stronghold of Islah in northern Yemen, coinciding with the start of the battle for oil fields in the neighboring province of Shabwah and arranging to advance towards Marib.

Southern media quoted sources in the giants as saying that the cannons supplied by Saudi Arabia, known as “hell cannons,” aimed at the city of Marib to target any military movements.

The installation of “hell cannons” batteries in several areas of Shabwah coincided with the start of the giants factions that recently took control of the city of Ataq crwal towards the oil fields in Al-Uqla, where during the past hours these factions took control of Ayyad areas and secured Al-Ain line leading to Al-Uqla oil fields, which are the last areas in which the Special Security Forces factions affiliated with Islah are stationed.

Local sources expected a new battle to erupt on Al-Uqla Road; it cited a new build-up of Special Security Forces in Armaa and Al-Masana’a districts.

The mobilization also came at a time when UAE called in reinforcements from Tariq’s forces on the western coast; it is expected to publish in the coming hours in areas of Marib city.

It is not yet clear whether the cannons of Hell, which played a role in Ataq battle for giants, erected as part of arrangements for the Battle of Marib. Providing artillery support to forces expected to enter the city of Marib or to reduce the push Islah with reinforcements as the start of the battle to restore the oil fields in Shabwah? However, its timing indicates that the situation is heading towards a military escalation.

UNESCO Intervenes to Save 10,000 Homes in Old Sana’a City