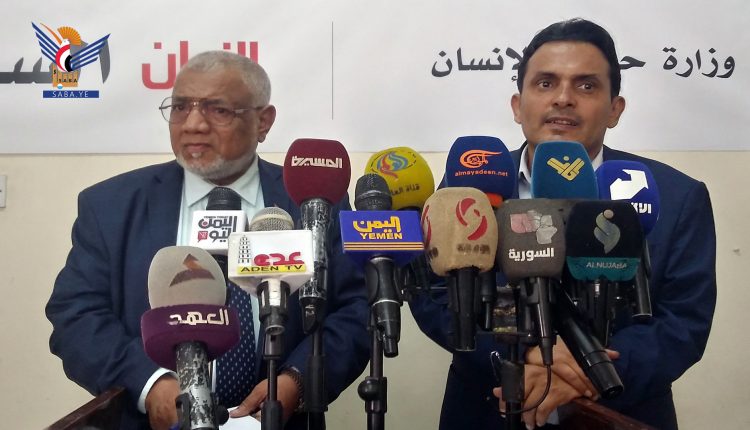 
A press conference held Saturday by the Ministries of Human Rights and Social Affairs in the capital, Sana’a, reviewed the humanitarian suffering resulting from the continuation of the siege.

At the conference, the Minister of Social Affairs and Labor in Sana’a government, Obaid bin Dhabei, considered the siege on Yemen a war crime and genocide targeting everyone, men, women, the elderly and children.

He reviewed the damages suffered by the infrastructure of the Ministry of Social Affairs and its institutions and the destruction of its funding sources, noting that the Saudi-led coalition countries and Saudi-sponsored forces have transgressed, with their crimes and war, all religious, human rights and human rights laws.

For his part, the Acting Minister of Human Rights in Sana’a government, Ali Al-Dailami, said that “the siege imposed by the Saudi coalition is a collective punishment against all the Yemeni people without exception.”

He touched on the catastrophic effects of the siege during more than seven years in the economic, health, educational, humanitarian and other fields that target the life and livelihood of the Yemeni citizen.

The Acting Minister of Human Rights expressed regret that the international community did not take any position towards the brutality of the siege by continuing its silence, which represents a disgrace to humanity.

A statement issued by the press conference dealt with the catastrophic effects on the Yemeni citizen as a result of the siege and war in various fields, especially humanitarian field.

The statement condemned the politicization of humanitarian issues, the policy of starvation, suspension of salaries, travel ban, transfer of central bank functions, and prevention of entry of fuel ships by the coalition with the complicity of the international community and UN organizations.

“The siege on Yemen is considered a collective punishment and a slow death for civilians by preventing the entry of the citizen’s needs, including food and medicine, except for allowing the missiles to fall to kill civilians and destroy service facilities,” the statement added.