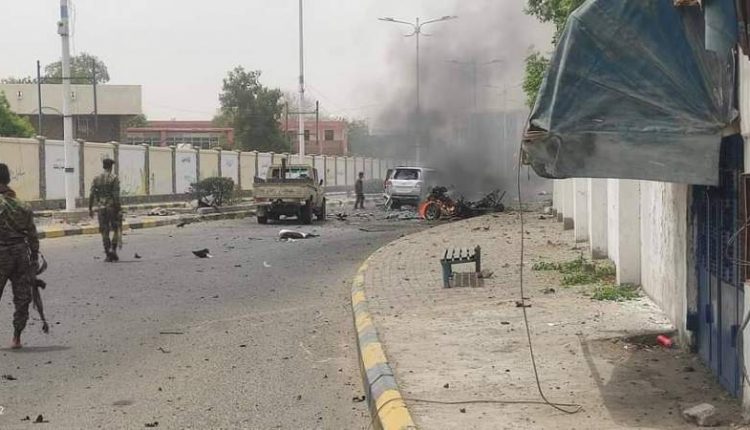 
Saleh Al-Sayed, the commander of the transitional factions in Lahij, vowed, the perpetrators of Aden operation to pursue. This comes in his first appearance after his caravan was targeted by a car bomb.

Alsayed appeared in a video clip while leaning on two people, his legs are not shown in the photo, which reinforces the news of his injury, he also said in the clip that he would not abandon their pursuit without naming the party that carried out the attack.

Earlier today, unknown persons targeted AlSayed with a car bomb in Khormaksar district, as a result, there were dead and wounded, including an entire family.

A number of STC leaders visited the scene of the operation, most notably the commander of the Security Belt, Jalal Al-Rubaie, while the absence of Shallal Shaye, the leader of the “anti-terrorism” faction, sparked controversy among southern activists on social media.

Some accused him of masterminding the operation to abort the restructuring scheme led by Aidarous Al-Zubaidi, it recently emerged with the joint deployment of Sayyid’s forces and the security belt in Tur Al Baha district, west of Lahij, and among those who defended him accusing the “Brotherhood” of masterminding the operation, in response to storming the house of the Transport Brigade Commander, Amjad Khaled,by AlSayed a few days ago.

Southern activists revealed on Thursday that Saudi Arabia was behind Aden bombings, with the aim of weakening STC militarily.

Tweeters on social media reported that the cell that oversaw the implementation of the recent operations, it was equipped in a camp for the Saudi forces in Aden, based on surveillance cameras.

Activists called for revealing the truth to the south citizens, and stop covering up what they described as “Saudi crimes.”

The operation came at a time when Saudi Arabia is suffering, with the STC continuing to monopolize the “presidential” decision after expelling the rest of the council members.

It also comes at a time when many factions oppose Saudi plans to merge with the Ministries of Defense and Interior. This indicates that Saudi Arabia has already begun restructuring the southern factions in the usual way.