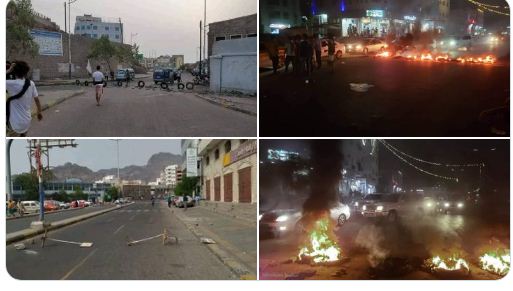 
Hundreds of angry protesters stormed on Monday evening the Ma’asheq Presidential Palace in the city of Aden, south of Yemen, denouncing the deteriorating economic and the lack of basic services.

Local sources reported the protesters gathered in front of Al-Ma’ashiq” Palace, the headquarters of the Leadership and Government Council, and closed a number of main streets in the city, while they talked about the protesters storming the courtyards of the palace.

The protesters chanted slogans against the Riyadh-formed Presidential Council and the coalition-run government, against the backdrop of the continued deterioration of living conditions, the collapse of the local currency, and the shortage of essential services.

Aden also witnessed the closure of al-Zeit port by the protesters, coinciding with the outage of the electricity system in all districts of the province, while the General Electricity Corporation in Aden announced that the electricity was cut off as a result of a defect in one of the switches operating the generation system, which caused an increase in the hours of outage.

On Sunday, the protesters in Aden closed a number of main streets and set tyres on fire as part of their protest operations.