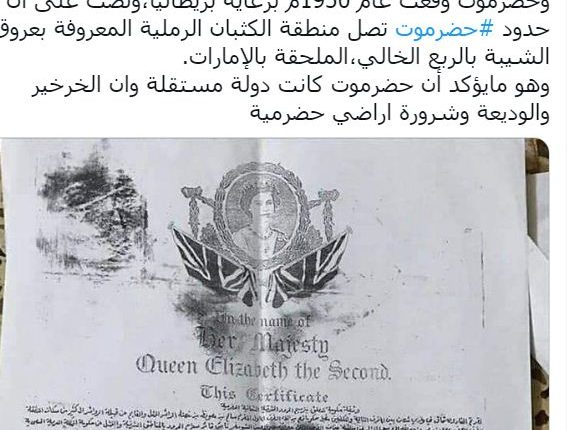 
A state of controversy erupted among the Yemeni elites, loyal to the coalition, with the start of marketing Saudization of areas rich in oil and gas and strategic locations in the east of the country, which have been under a Saudi-led war and siege for eight years.

They are affiliated with the Saudi intelligence. During the past hours, they continued to market a Saudi plan to annex the eastern region known as “Hadhramaut” to Saudi Arabia by leaking news that Saudi Arabia had started a wide naturalization campaign among leaders, important figures and tribal sheikhs in the governorates of Mahrah, Hadhramaut and Shabwah, as part of a naturalization process targeting about two million people, they are the population of those provinces, according to the latest population census in Yemen.

The talk about naturalization comes in parallel with a Saudi movement in Riyadh at the level of influential leaders in those provinces, which attracted Saudi Arabia and naturalized most of them during the past decades, with the aim of passing a plan aimed at placing what is known as “Hadhramaut Province” under Saudi guardianship, in the future, under the pretext of starting to include Yemen in the Gulf Cooperation Council.

Saudi Arabia’s focus on Hadhramaut region is economically feasible because of wealth and energy stored in these areas, not to mention its strategic location, which Saudi Arabia aspires to turn into a port to export its oil to the world instead of the Strait of Hormuz.

Although the Yemeni activist and writer Mona Safwan does not rule out the inclusion of these areas in the Gulf Cooperation within the framework of alliances aimed at normalization with Israel, it describes this step as a failure, given that the scheme aims only to swallow Yemen and keep it under Saudi tutelage in order to weigh it against competitors within the council such as Qatar and UAE, ruling out at the same time that the decision to annex Yemen aims to push it economically and politically.

Safwan believes that the most important option for the advancement of Yemen is its liberation from Saudi and Gulf hegemony.

Safwan is one of the activists who have become aware and fears of marketing the Saudization of the eastern province of Yemen.  Activists from across the Yemeni spectrum loyal to the coalition, Canis Mansour, a leader in the Islah party, and Majid al-Daeri, who is affiliated with STC, have republished documents on the Yemeni-Saudi border agreements on the eastern side of Yemen.

The document shows the extension of Yemen map, parts of which were swallowed north in Jizan, Najran and Asir, to the depth of the lands which is now under Saudi guardianship in the Empty Quarter and the border villages in Al-Wadiah, Sharurah and Al Kharkhir.

Although they considered the Saudi scheme an extension of that agreement concluded under British auspices, Saudi Arabia turned against it, swallowing thousands of kilometers of Yemeni territory. Others recalled the extent of the suffering that Kharakhir tribes, currently under the guardianship of Saudi Arabia, had experienced after it was displaced from her areas with temptations, including naturalization, it finds herself, after decades, displaced in desert areas in Sharurah, and her children are denied even access to medical care in Saudi hospitals.