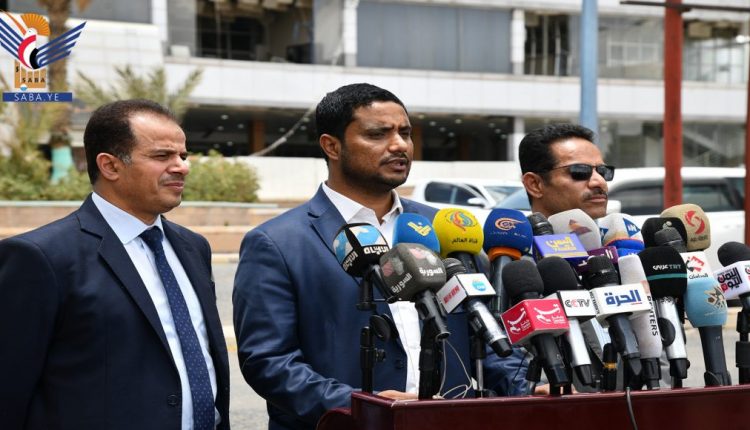 
Undersecretary of the Civil Aviation and Meteorology Authority (CAMA), Raed Jabal, on Sunday said that “the Saudi-led coalition deliberately insults the Yemeni people and doubles their suffering since more than eight years of war and siege.”

Jabal pointed out that nearly a month after the armistice was announced, in early April, no flights had been operated to the two specified destinations, “Amman and Cairo.”

He affirmed that the Saudi countries continue to delay the opening of Sana’a International Airport.

“Yesterday, we were surprised that the coalition did not approve a permit for the flight that was scheduled for Sunday, April 24th, Sana’a-Amman flight,” he said.

He stated that “the Saudi coalition has been pursuing this policy since the beginning of the war, and deliberately insulting the Yemeni people, exacerbating the humanitarian situation and increasing the suffering of Yemenis.”

Regarding passports, Jabal confirmed that there is no official objection to passports by the Kingdom of Jordan or the coalition, despite its intransigence, as they are approved Yemeni passports.

He pointed out that the Civil Aviation Authority tried to communicate with the United Nations if there is a clear justification for not conducting the flight, and found nothing but cajoling and procrastination until the end of the night.

“We in the General Authority of Civil Aviation and Meteorology, Sanaa Airport, the Ministries of Foreign Affairs, Transport and Health, and the Yemeni Airlines Company have been in continuous meeting and coordination over the past period since the start of the armistice announcement in order to facilitate and operate flights,” Jabal said.

He pointed out that work has been done to rehabilitate Sana’a International Airport. He added, “The airport is currently working well, and United Nations flights are operated on a daily basis, and we provide navigation services in accordance with international conditions and requirements that are in force globally.”

The Undersecretary of the Civil Aviation Authority reiterated that the coalition countries insist that the Yemeni people remain in prison and isolated from the world, and the suffering of patients continues.

He indicated that many citizens arrived at Sanaa Airport to travel on the flight from Sanaa to Amman, and nearly 150 passengers were booked on the scheduled flight, of whom 70 percent of those with special needs and patients, and others need to travel for visits and other purposes.

“About 150 travelers from several countries gathered in the Jordanian capital, Amman, to move to Sana’a.. hoping to return to their homeland and their families, but unfortunately the Saudi coalition deliberately insulted them and doubled their suffering,” he added.

Jabal held the coalition countries fully responsible for the result of this behavior, “which reflects a hidden hatred of the Yemeni people, who refused subordination and guardianship.”