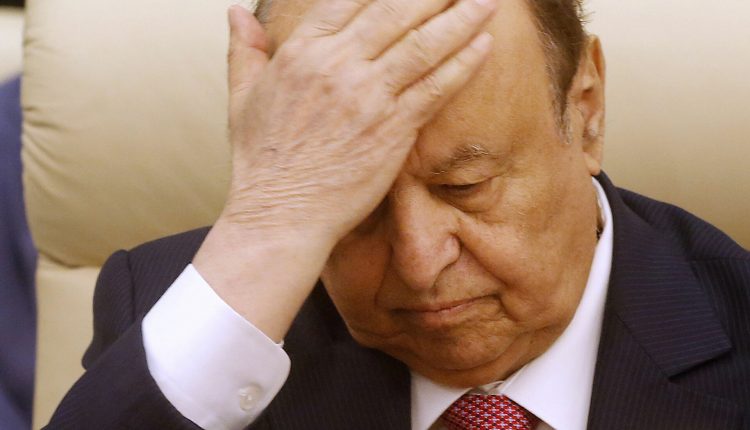 British Efforts Failure to Get Hadi’s Family Out


Concern escalated, in the ranks of “legitimacy”, about the fate of Hadi, the ousted president, after Saudi Arabia refused to disclose him and release his family.

Diplomatic sources in the Saudi capital, Riyadh, said that Saudi Arabia informed British mediators that Hadi family are living their normal lives and it is unlikely that it will be allowed to leave Riyadh at this time.

During the past two days, British diplomats, led by Ambassador Richard Oppenheim, tried to pressure on Saudi Arabia to allow Hadi’s family to leave his residence outside the kingdom.

Since the end of last week, Saudi Arabia has imposed strict security measures on Hadi and his family members, including his children and grandchildren. Hadi is being held, according to the sources, far from his family, whose phones and mobile devices have been confiscated.

The reasons of Hadi detention, who announced last week, after Saudi pressure, that he transferred his powers to a council headed by Rashad Al-Alimi, were not known. It was also not clear whether it was waiting for the arrangements of transferring power to be completed, or for other motives. But Hadi rejected repeated Saudi attempts to hand over power, his acquiescence to pressure raised more fears about his fate, especially as he preserves an archive of eight years of Saudi war, this reinforces Riyadh’s concern about its attempt to turn the tables on it.

The President of the Presidential Council, Rashad Al-Alimi, in a brief statement made it clear that Hadi is no longer part of “legitimacy,” and described in his statement in which he outlined his program for the next stage as “the former president.”

The announcement did not specify Hadi’s status after the transfer of his powers. However, al-Alimi’s reference in his latest statement removed much confusion about Hadi’s future.