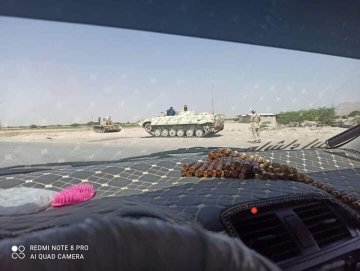 
The forces of the First Military district, affiliated with the deputy head of the “legitimacy,” surrounded Hours ago, the tribal militia’s points with tanks, which threatens to lead to confrontations between the two parties.

Tribal sources in Wadi Hadramout reported that the forces of “Ali Mohsen” deployed a number of tanks and armored vehicles, near the tribal militia points on the road leading to the oil fields, it is expected that these forces will launch a large-scale military operation to raise the Hadrami armed men points that calling for the exit of Mohsen’s forces from AlWadi and desert of the oil province.

The deployment of Mohsen’s forces came in Al-Khashaa, following an agreement between the coalition and the Hadrami armed men to open the way for the passage of fuel locomotives to the “legitimacy” areas, the sources indicated that Nahed tribes had sent large reinforcements to confront any possible attack.

The timing of the Hadi forces’ movement, days before the Riyadh meeting, indicates the efforts of the anti-meeting parties, most notably, Mohsen, who is expected to be excluded from the scene to impose a new reality, especially since the military move came days after the head of Islah branch, Salah Battis, announced the announcement of the eastern region of Yemen, among the steps that suggest the party’s efforts to impose a fait accompli before the upcoming meeting.

Business in America, A Qualitative Yemeni Addition to the Arab-American Economic Media