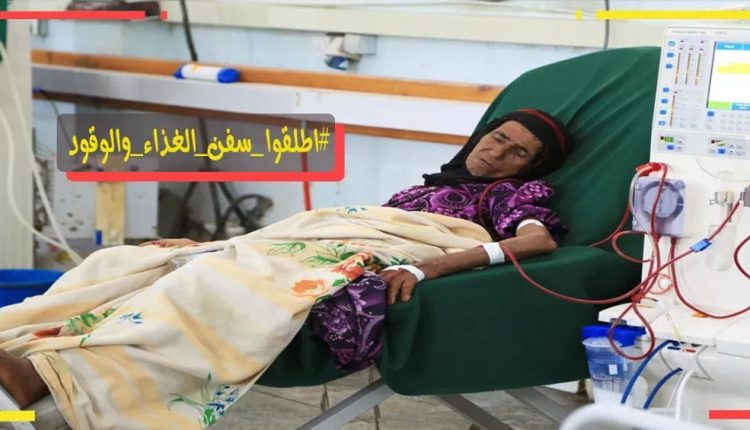 
The repercussions of the Saudi-Emirati coalition’s detention of oil derivatives ships reached all vital sectors in Yemen, especially health sector. This comes in light of the UN silence and its complicity with those who wage war and siege on Yemen.

Health ministry in Sana’a said that preventing fuel ships from entering Hodeidah port caused “a health disaster in Yemen, the largest in the world.” Noting the scale of this disaster, which led to the suspension of the health services provision to thousands of citizens.

it also indicated that “all departments of major and minor operations will be stopped, and 15 government dialysis centers are threatened to stop, the stopping of five charitable and private dialysis centers will threaten the lives of 5,000 dialysis patients,

In addition to threat of 2,000 critical cases of newborns who need care and nursery, and the threat of life of 500 deliveries needing caesarean section operations daily, it also stopped all diagnostic methods and radiotherapy.”

Health ministry in Sana’a followed up on a statement of a protest sit-in carried out today, that the oil derivatives crisis led to “the interruption of all communication and movement between governorates.” Increasing the disaster and exacerbating the situation, as patients are unable to reach specialized centers such as oncology for treatment,

Sana’a health sector held the United Nations “fully responsible for the crimes of the blockade and maritime piracy of oil derivatives.” and it shirk for all humanitarian agreements and obligations.” warning that the repercussions of the crisis will worsen if the fuel access continues.

American-International Recovery of Hadi after Tightening Sanctions against Ahmed Ali

Sana’a Accuses United Nations of Participating in War on Yemen