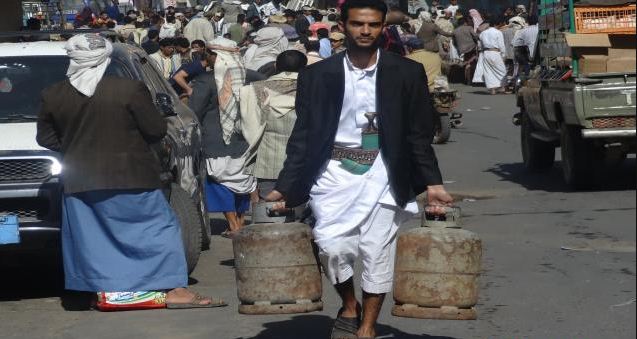 
Human rights organizations in Marib condemned on Tuesday, what they described as the policy of collective punishment implemented by Hadi’s authorities in the city.

Hussein bin Saad Al-Obaidi, director of the Madari Center for Strategic Studies and Research, based in the city of Marib, considered the concealment of petroleum and gas materials despite the increase in prices as a collective punishment for the population. He accused the authority of Governor Sultan Al-Arada inability and corruption in managing the gas and oil crisis and absence of all state agencies to control and supervise the resources and shares of the Yemeni provinces.

Al-Obaidi indicated in a series of tweets on his official page on social networking sites that despite the most important decision of the province authorities in the production of gas and gasoline, raising the price of a gas cylinder in the city to 4800 riyals, however, gas is still not available in the local market, which exacerbated the fuel crisis experienced by the province in light of gasoline lack.

The city of Marib, the only remaining district under Hadi’s authority, out of about 14 districts, most of which are controlled by the “Houthis” lives Oil derivatives crisis about 3 months ago. According to Al-Obeidi, in addition to the electricity crisis, which is cut off for long hours.

The criticism of Al-Obaidi, one of the most prominent activists in the city, came after Al-Arada’s interview with the Saudi newspaper Asharq Al-Awsat, where he tried to defend his authority by talking about providing domestic gas to all provinces.

Sana’a Continues to Mobilize and Threatens with Military Actions