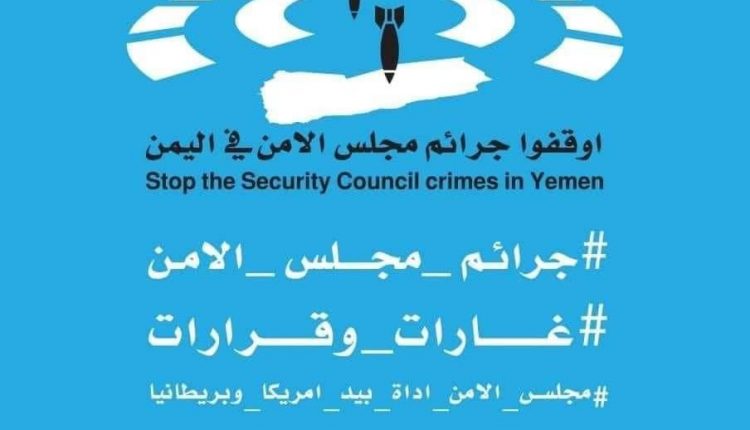 
The National Committee to Stop the Crimes of the Security Council in Yemen has launched a human rights documentation campaign to expose the crimes and violations against the Yemeni civilians, since March 2015, under the slogan “Stop the Security Council Crimes in Yemen.

In a statement issued after its meeting on Tuesday, the committee has called on rights organizations, resistance movements, and all free people in the world to actively contribute to stopping crimes and violations in Yemen, and liberating it from international slavery.

The committee has monitored the most important violations in the UN Security Council resolutions regarding to the course of events, especially as it did not name the crimes related to rights and humanitarian violations committed by the Saudi and UAE led coalition, launched against Yemen since March 2015.

The committee has stressed everyone’s obligation to bear legal and moral responsibility towards the civilians in Yemen. It illustrates that the UN Security Council is a partner in the Saudi coalition against Yemen, through its support for the countries of Saudi coalition, and its endeavor to obliterate war crimes and genocide, which do not have a statute of limitations, foremost of which is the targeting of civilian objects and innocent lives, and violating the UN rules, regulations and charters.

The committee considers this campaign as a starting point for broader campaigns aimed at stopping the crimes of the Security Council around the world, urging the conscious and free voices to convey the grievances of Yemen. The committee equally stresses that the Security Council is one of the most prominent pillars participating in the war by covering up the crimes and its parties, and its attempts to grant it a false legitimacy.

The statement urged the Security Council to expose the perfidious stances of the local, regional and international communities, and all rights and humanitarian actors.

Further, the committee has condemned the bias of the Security Council to the aggressor against the aggressed, for various considerations, represented in the US dictates, and the interventions of the arrogant countries, which are idiomatically called “the major powers”, and its neglect of the most important issues of the Yemeni crisis, especially the atrocities, and its attempts to impose the unilateral “Saudi-Emirati-American-British” vision. This vision has proven its failure, year after year.

The statement affirmed that the council’s goal focuses on imposing external guardianship and confiscating Yemeni sovereignty, in a clear coup against the laws and norms of the international community.

The National Committee to Stop the Crimes of the Security Council in Yemen’ has called on rights and humanitarian organizations, including those affiliated with the Security Council, to play an efficient role, instead of being complicit in manipulating the plight of the Yemeni people, especially as the violations committed by the UN bodies in Yemen amount to war crimes.

The committee confirmed that the UN Security Council, whether some of its envoys or some of its bodies have involved in legal violations, which contradict international covenants and charters. It also proves, beyond any doubt, that the major powers are trying to influence the international resolutions, and divert its course from the United Nations’ commitments, for their own interests.

The committee has called for action, locally and externally, to stop the disregard for Yemeni blood and tampering with Yemen’s national economy by the coalition parties and the Hadi government. Besides, it has called to hold accountable individuals, groups, organizations and governments involved in the war against Yemen, in accordance with international laws, charters and norms.

The National Committee to Stop the Crimes of the Security Council in Yemen’ has also called on the media and rights activists to work, transparently and credibly, and to stand with the assaulted Yemeni people through reflecting a clear picture of what is happening in Yemen, fairly and objectively, and to expose the attacks and abuses of the coalition and its affiliated tools, who are trying to evade their responsibilities by involving the Security Council in adopting unjust resolutions and statements, and which rely on what the Hadi government and the coalition and other organizations, that serving their political agendas.

The committee’s statement has urged to list the Gulf military officials and the complicit UN officials, who have involved in grave crimes in Yemen, on the sanctions list, in accordance with the international resolutions in force, as well the accountability of states, which export banned and internationally prohibited weapons to Saudi Arabia and the UAE, as they are partners in the war, unless they stop selling them weapons.

Eventually, the committee has appealed to the Yemeni, Arab and all free people of the world to take part in the campaign to stop the crimes of the Security Council, in preparation to hold accountable the Council, the coalition, its tools, forces, regimes, governments and organizations involved in the war against Yemen, in a bid to achieve justice and not to circumvent these crimes.