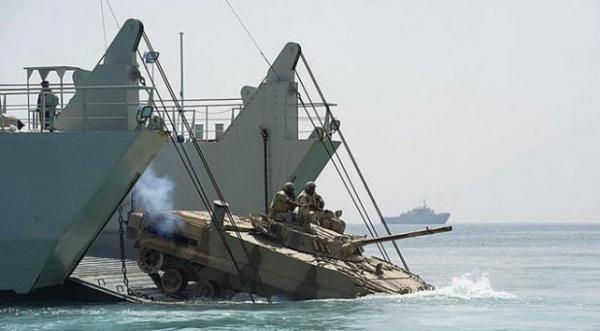 Since the beginning of the war on Yemen, the Saudi-led coalition countries, backed by America, have intensified their presence in the waters of the Red Sea until it is teeming with dozens of military pieces belonging to the coalition countries under the pretext of protecting what is called “legitimacy”.

This came as a cover for the real goal, which is to keep the coasts of the Red Sea and Bab al-Mandab under the military hegemony of the United States of America, which seeks to besiege China and cut off the road to the Silk Line that China recently adopted.

In parallel, the United States instructed the coalition countries to bring in “Takfiri” elements through the port of Mocha to be used later as a justification for an American military presence in this region.

The features of military hegemony today became clear through the launch of naval training led by the United States and Israel in the Red Sea.

The US Navy statement said today that the IMX international training, which began Monday in Bahrain and will last for 18 days, includes 9,000 personnel and 50 ships from more than 60 participating countries and organizations. It is the largest unmanned aerial vehicle exercise with more than 80 drone systems.

Also, the Israeli army spokesman, “Avichai Adraei” wrote in a tweet on Twitter that the fleet of missile ships and the underwater mission unit will train with the US Fifth Fleet in the Red Sea region.

The training includes a number of countries, including Saudi Arabia, Pakistan and the Sultanate of Oman, in addition to the UAE and Bahrain, which announced in September 2020 the normalization of relations with Israel.

Deputy Chief of the General Staff of Sanaa armed forces, Major General Ali Hammoud Al-Mushki, upon his meeting with the former head of the United Nations Mission to support the Hodeida Agreement, General Abhijit Guha, in September 2021, warned about the danger of bringing in Takfiri elements affiliated with the so-called Islamic State through the port of Mocha by the coalition countries and its use as an access point for various types of weapons, explosives and mines, which would destabilize the security of maritime navigation in the Red Sea.

Al-Mushki’s warnings came at a time when the United States was leading a joint military maneuver that brought together Israel, the UAE and Bahrain in the Red Sea, with the aim of what America called at the time protecting maritime navigation, which observers considered a message that the United States wanted to send to other regional powers.

Today, in conjunction with the launch of the IMX military training, Sanaa returns to warn, through Major General Al-Mushki, of the militarization of the Red Sea, stressing that it will not allow maneuvers to be conducted near Yemeni territorial waters.

Fierce Clashes Blow up in Aden