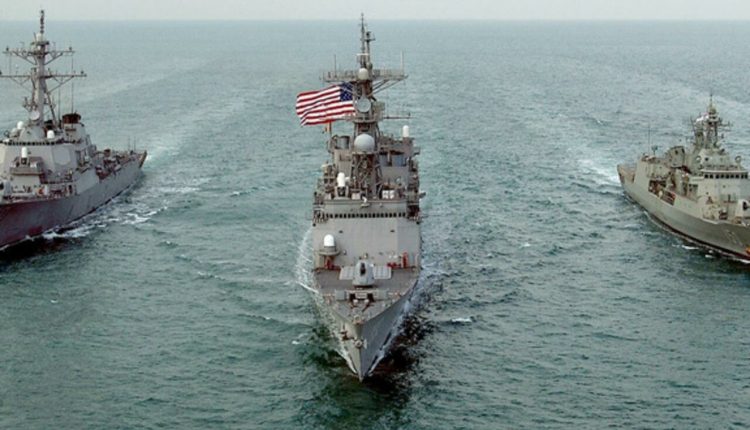 
Along the coasts of Yemen, the United States of America launched large-scale military exercises with the participation of more than 60 countries, most notably Israel, Egypt, Oman, Bahrain, UAE and Saudi Arabia. But these maneuvers, which come at a difficult time for Washington’s allies in the region, after the recent attacks on Abu Dhabi, it is nothing but an expansion to the base of the so-called “Arab alliance” that Saudi Arabia launched in March of the year 2015 with about 17 countries, It did not achieve any significant achievement at the level of US agenda in the region.

According to the Central Command of US Naval Forces, approximately 9,000 personnel, and 50 ships will participate in the maneuvers that just launched in the Red Sea, close to the territorial waters of Yemen, and these maneuvers may continue until 17 February. Regardless of the maneuvers purpose, which expectations indicate that it is nothing more than an operation to militarize the territorial waters of Yemen and tightening the noose further on the country, which has been subjected to war and siege for the past 7 years, in a new attempt to bring his people and national forces to their knees, there is greater pressure on Yemen to release UAE ship, which has been held for weeks after it sailed with military equipment for the coalition in the territorial waters of the western coast of Yemen, or even stop cross-border attacks, this dimension is related to finding a “Sunni alliance” representing the Arab countries and Israel to confront the eastern camp and Iran.

Although the United States had previously failed to achieve it with various names, most notably the Alliance of countries bordering the Red Sea and others, However, the coincidence of the new American step through the joint military maneuver indicates that the United States is determined this time to heal its allies in the region, including Tel Aviv, especially with approaching resolution on Iran nuclear agreement file and the rise of Russian-Chinese influence in the region.

America’s step from the joint maneuver even though it is the second for Israel in the region after previous maneuvers with UAE and Bahrain there, which come within the framework of a prelude to broad normalization with Saudi Arabia, especially since these maneuvers  were preceded by Gulf-Israeli media exaggeration, in an attempt to portray the common threats from Iran and the axis of resistance to both, in an attempt to prepare people psychologically for normalization, which, according to US media reports, is part of broad plans to end the wars on the region countries.

There is nothing new in the joint maneuvers other than the participation of Saudi Arabia alongside Israel. This is an extension to relations that began to develop with Israel’s celebration by the crossing of President Isaac Herzog’s plane Saudi airspace on its way to the Emirates, and what followed was the abolition of the   monotheism slogan from the flag of Saudi Arabia in preparation for the official announcement of normalization, but the most important thing this time is that the maneuver that was launched in conjunction with the announcement of US military to start overflights in the skies of Yemen, refers to the United States taking the helm in the region, after proving the failure of its allies in the Gulf to rely on themselves, expanding its allies, in the hope that it will achieve weight in the region and a card of influence, and it reflects the extent of the American and Israeli fears of Yemen power emerging from under the pillars of war.