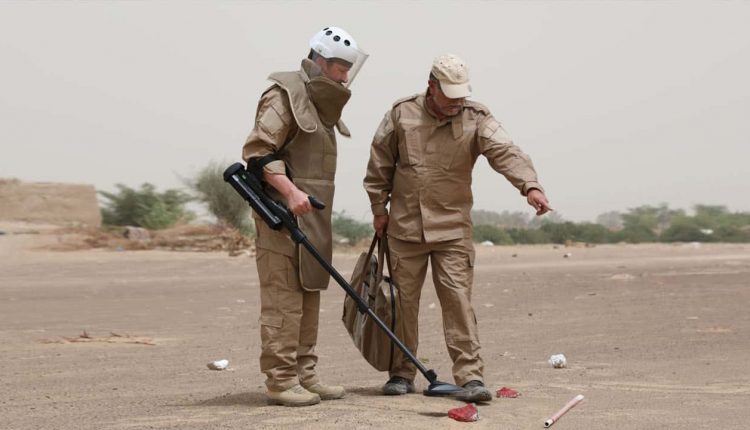 
Head of the National Center for Mine Action, Brigadier General Ali Safra, warned on Saturday from the stop of the center’s humanitarian work if there was no support for conducting field work in the targeted districts in Hodeida province.

Safra confirmed that the center has practiced its work in opening the main roads and clearing them of mines and explosives since the 14th of last November, with the available simple capabilities.

He stated that the center, during this period and until today, has not received any support from the United Nations with regard to the requirements of field work.

Safra indicated that the districts of Al-Mina, Al-Hawk, Al-Hali, Al-Durayhimi, Al-Tuhita, Beit Al-Faqih and Zabid represent 80% of the total areas contaminated with cluster bombs, mines and remnants of war with an estimated area of about 140 million square meters, includes hundreds of villages and population centers.

He pointed out that the size and problem of cluster bombs in Yemen is very large, and in Hodeida in particular.

“The center has received many appeals to intervene to exhume the bodies of victims of explosives, cluster bombs and mines, or to evacuate the wounded as a result,” Safra said, noting that the number of victims amounted to 150 dead and wounded in just three months, which calls for intensifying efforts from humanitarian partners in the province.

Brig. Gen. Safra stated that the support announced in mid-December last year by OCHA in the amount of 1.5 million dollars, as support for the removal of mines and cluster bombs in Hodeida, has not been received so far.

He pointed out that what was reported on the available amount by the UNDP is not sufficient.