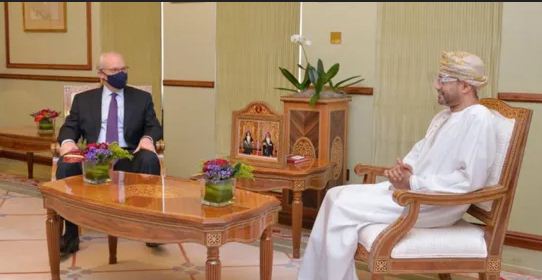 
US envoy to Yemen, Tim Lenderking, arrived to the Omani capital Muscat, amid US threats which indicates that the United States’ attempt to keep the Yemeni file under its control, In light of reports talking on its efforts to conclude a broad agreement in the region to enhance its influence.

Lenderking said in a statement that, in his meeting with Oman’s Minister of Foreign Affairs,Sayyid Badr Albusaidi , he called all active forces to put pressure on all parties to return to dialogue.

Lenderking’s Tour who had started a few days ago a tour in the region from the Saudi capital, coincided with the escalation of the United States in Yemen file, in an attempt to allay the fears of its allies in the region by attacking what it describes as “Houthis” and threatening to punish them.

Negotiations conducted by Saudi Arabia and UAE with the national security official in Biden administration, Jake Sullivan failed to advance the desire of the warring parties to neutralize Sana’a by returning Anssarallah to the sanctions list.

In this context, the American Foreign Policy magazine revealed that ending the war on Yemen is linked to wide regional files, the most prominent of these is “Abraham” agreement for normalization with Israel in the region and the Iranian nuclear file, in an indication that United States is currently engaged in negotiations with Iran, and seeks to use the war on Yemen as a card in Vienna negotiations.

The magazine quoted on US officials as saying that until Saudi Arabia and Iran reach an agreement, or those described as “Houthis” and Saudi Arabia will not end what they described as “the conflict in Yemen,” in a clear confirmation to the size of the American role in the war, which is entering its seventh year.