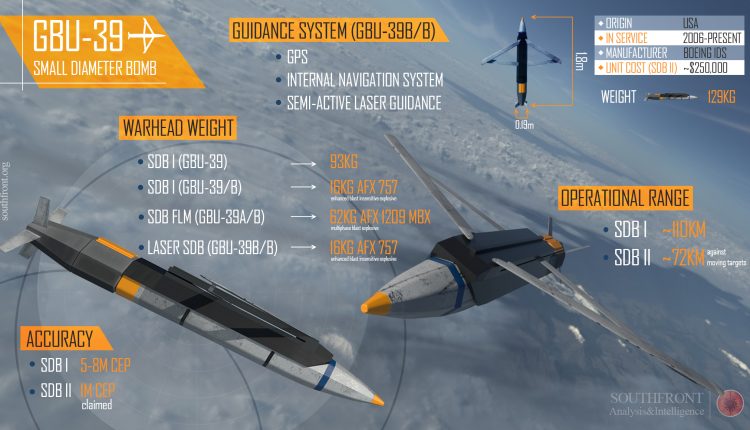 
Sana’a-based Executive Center for Mine Action has confirmed that the Saudi-led coalition used a GBU-39 satellite-guided smart bomb.

GBU, also known by JDAM, the Joint Direct Attack Munition, is directed by the satellite used to strike Aser area in Maeen district in the Capital Sana’a (on Sunday this week).

A report issued by the Center and the competent authorities after a field visit to the area indicated that the aggression’s targeting of the Aser area led to the death of three citizens and caused material damage, including the complete and partial destruction of a mosque and homes and schools.

The report added citizens’ properties and cars were damaged, and a number of families were displaced from completely damaged homes in the Libyan neighborhood.

It mentioned some of the places where this type of bomb was used and documented the use of JDAM bombs in Yemen during the period from March 29, 2015, to 2022, by targeting and bombing civilian objects with GBU-31 JDAM bomb.

The family of Mohammed al-Sanabani, Sanban’s wedding was targeted by the aggression in 2015, the homes of a citizen in al-Subaha in Sana’a 2020 were targeted, and a mosque in Aser neighborhood in the Libyan city was hit on 02 Jan. 2022.

The report presented sales of JDAM bombs to Saudi Arabia, where 900 units were sold from Saudi Arabia between 2017 and 2018 during the war against Yemen in a deal that amounted to $123 million.