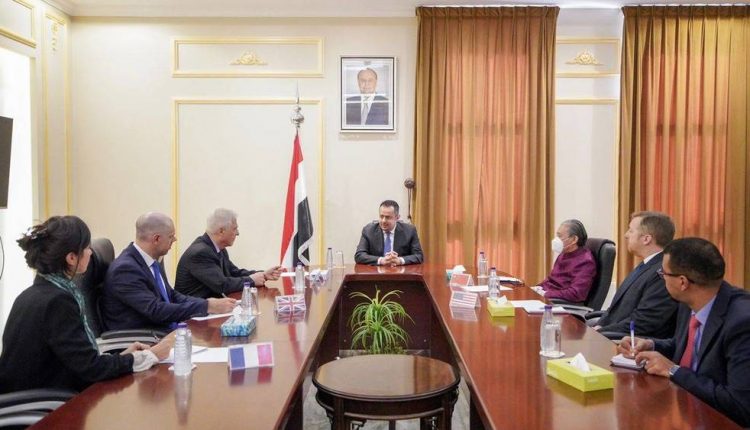 The ambassadors of the five permanent members of the Security Council affirmed their support for the head of Hadi government, who is being marketed by Saudi Arabia as an alternative to Hadi and his deputy. This came during a meeting in the Saudi capital, as part of arrangements for changes in “legitimacy”.

He called on the ambassadors to pursue a comprehensive ceasefire agreement in Yemen. Expressing their full support for Maeen Abdul Malik in providing basic services and strengthening the work of institutions, and achieving economic reforms in a step described as a green light for a certain march in the procession of Saudi Arabia, which rearranges “legitimacy” amid opposition from Hadi and his deputy, who fear losing their interests from the prime minister of the war on Yemen.

the statement of five ambassadors, which was supposed to be devoted during a meeting with Hadi, it comes as part of Saudi efforts to frame Maeen internationally to carry out the tasks of Hadi, who recently became isolated even from meeting Saudi leaders, and the last of them was Khalid bin Salman, who summoned Maeen from Aden to consult about upcoming changes in the ranks of his government, according to media reports, it may affect the Ministry of Foreign Affairs and Defense, the most prominent pillars of Hadi and Ali Mohsen, in addition to changing the governors of oil provinces, and ignored Hadi and Mohsen, who residing a few kilometers from his palace.

The post An International Blessing to Transfer Hadi’s Powers first appeared on - dailyyemen.

Houthis Target Sensitive Sites in Jizan, Down US Spy Plane in Jawf