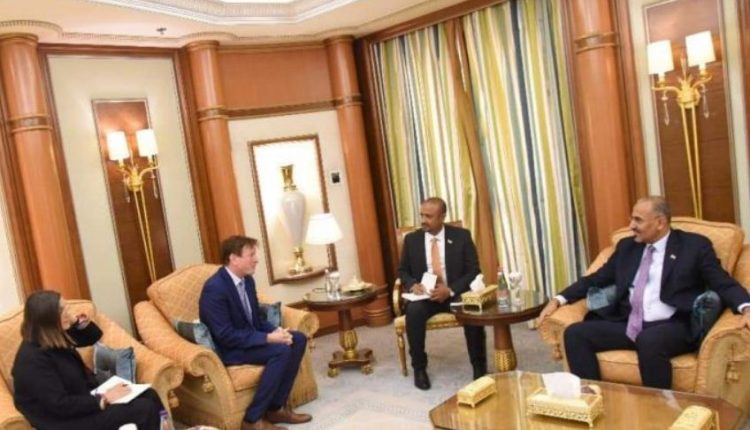 
Saudi Arabia imposed strict measures on the head of the Transitional Council, Aidarous Al-Zubaidi, in an attempt to abort his moves aimed at mixing papers in Yemen.

Diplomatic sources reported that Saudi authorities have reinforced their forces surrounding a hotel where Al-Zubaidi and his negotiating delegation are staying circulating directives preventing him from receiving or visiting any foreign diplomats without prior permission.

The new Saudi measures came after Al-Zubaidi tried to market the demands of his council for the secession of the south, internationally.

Al-Zubaidi held meetings with several foreign ambassadors, the latest of whom was the ambassador of Norway kingdom, where he discussed supporting his forces to secure maritime navigation in Aden Gulf and Bab al-Mandab.

The movements of Al-Zubaidi, who was summoned by Saudi Arabia as part of arrangements to put pressure on the factions loyal to him by handing over the leadership to Tariq Saleh, would mix Riyadh’s cards and complicate its tasks in implementing its new strategy in Yemen.

The house arrest would also isolate the leaders of the transitional from its popular base, especially in light of the news that UAE is detaining Al-Zubaidi’s deputy, Hani bin Brik.

On the ground it was announced in the city of Aden, the most important stronghold of STC, on Sunday the failure of the security system of the Emirati-backed council, this paves the way for the security file in the city to be handed over to Tariq Saleh, who is being marketed by the coalition as an alternative to “legitimacy.”

The Director of Transitional Security, the former security official in the Saleh regime, Mutahar al-Shuaibi, admitted his failure to extend his control over the city, accusing the leaders of the Transitional, whom directors of police departments and security directorates of corruption, and terrorism.

The appointed Al-Shuaibi, appeared about two years ago as director of Aden security based on a consensus between the transitional and Hadi in a video clip explaining the cause of the security chaos in the city. More chaos is expected in light of the security system collapse.

The same accusation was made by Jalal al-Rubaie, the commander of the security belt in Aden, in charge of handling the security file in the city and he appeared during a televised conversation while taking off the flag of the south from his shoulder and throw it on the ground after accusing leaders in the council of exploiting the flag to carry out acts of thuggery, looting and corruption.

The emergence of these leaders at this difficult time for STC, in light of external pressures to implement Riyadh Agreement, which requires the departure of its factions from Aden, indicates that it is part of regional arrangements to end STC’s influence on the city of Aden by handing it over to the factions of Tariq Saleh, who had already begun a few days ago a restructuring process for the council’s factions, which regional parties are seeking to integrate his forces under the banner of Tariq Saleh, who is expected to hand him the helm of “legitimacy” leadership.