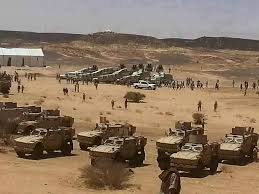 
Saudi Arabia intensified on Monday, its diplomatic and military actions in Yemen file, in conjunction with its recognition that “Houthis” is close to resolving the Battle of Marib amid US warnings of an incursion into its southern lands.

On the diplomatic front, the Saudi king sent a message to his Qatari counterpart that included, according to diplomatic sources, a request to join other Arab mediations pushed by Saudi Arabia, In an attempt to conclude an agreement on Marib, in the hope that it would prevent the military expansion of “Houthis” in eastern Yemen, especially towards Hadhramaut, bordering Saudi Arabia.

The sources reported that the joining of Qatar, which has enjoyed warm relations with Sana’a since its withdrawal from the coalition years ago, it may enhance the confidence of “Houthis” in mediators, and It may provide some kind of pressure to reach an agreement with Saudi Arabia. sources explained that Saudi Arabia had asked Egypt and the Sultanate of Oman, along with Sweden, to move the Yemeni file diplomatically, with a new offer includes the withdrawal of Sana’a forces from the districts of Shabwah province, in exchange for being allowed to enter Marib city, the last strongholds of the pro-coalition factions in northern Yemen with a comprehensive ceasefire.

The sources indicated that the Saudi offer was put forward by the Egyptian intelligence during a meeting with the Sanaa delegation in Cairo a few days ago, as the proposal was previously put forward by Gulf and foreign diplomats in Oman, which the US envoy visited a few days ago.

The results of these meetings are not yet known, but the escalation between Saudi Arabia and Yemen continues which emerged with renewed air attacks on Saudi Arabia, in parallel with coalition’s intensification to its raids on  Yemen city not to mention that Saudi Arabia has sent troops to UAE to carry out ground maneuvers, all of these indicate that Sana’a refused the offer, especially since it coincides with the approach of its forces to enter Marib city, which means a crushing victory for it and a defeat for coalition led by Saudi Arabia for seven years, which reinforces Saudi fears that Marib fall will be a prelude to an incursion into the depths of its territory, especially in light of what Marib constitutes due to its close proximity to the last Saudi border with Yemen, especially after the warnings reported by American Foreign Policy magazine, during which it expected military progress to be achieved by Houthis in the Saudi depth.