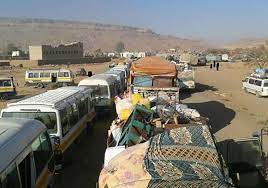 
The Saudi-led coalition began resettling hardline Salafist groups loyal to the UAE occupation forces as part of arrangements to destabilize the border with the Sultanate of Oman.

Sheikh Ali al-Harisi, chairman of the Mahrah sit-in protest committee, warned against these new moves, pointing out in press statements that “the aim is to spread the Saudi ideology and Wahhabi doctrine in this province.”

In recent days, the coalition has overseen the movement of hundreds of Salafists who used to live in the Dar al-Hadith center in al-Jubah directorate, Marib province, after the fall of the directorate to Sana’a forces and Houthis fighters loyal to the National Salvation Government.

Tribal sources in Mahrah said the coalition was currently settling the elements in the vicinity of al-Ghaydha International Airport, which is being used by the coalition as a military base for multinational forces.

The new move raised concerns over the transfer, which comes at a time when Saudi Arabia has begun handing over Mahrah to the UAE forces while reducing its own direct military deployment in the province.

The transfer of Wahhabi takfiris raises fears among the people of Mahrah that the Saudi occupation forces are enabling the UAE-backed mercenaries to blow up the situation and find justifications to strike violently against popular protests that denounce the continued occupation.