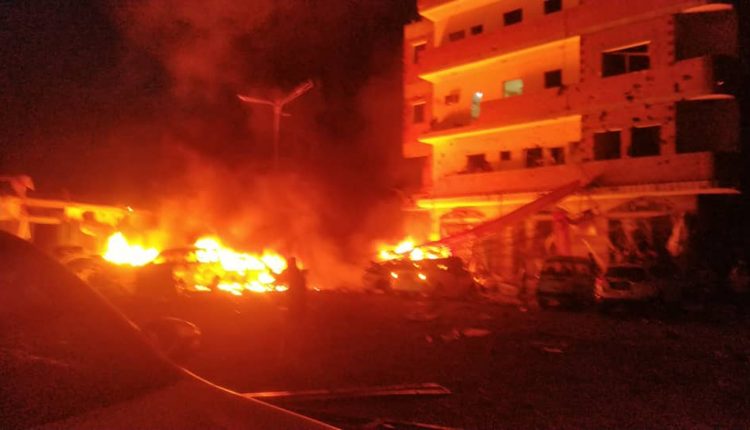 
At least 12 civilians were reportedly killed in an explosion near the entrance of Aden airport on Saturday, a senior security official said.

Local sources reported that a car loaded with a quantity of fuel went off in front of the airport’s hotel near, killing and wounding a number of citizens and burning a number of cars in the place.

Activists on social media circulated information and pictures showing the explosion that targeted the gate of Aden Airport, which is controlled by the UAE militia in Aden.

According to Mail Online, an anonymous official said: “Twelve civilians were killed in an explosion” in the vicinity of the airport and “there are also serious injuries” among others.

Witnesses and security sources told Reuters there was casualties. Immediately after, it was not clear whether the incident was an attack.

An airport official said a small truck blew up at an outer gate to the airport, while a local official and two security sources said the vehicle was carrying petroleum products.

The blast was strong and was heard across the city. Nearby residents’ windows were smashed.

Earlier this month a car bomb in Aden targeting a convoy carrying the city’s governor – an STC member – killed at least six people and wounded others. The governor survived.

Instability in the south complicates United Nations-led peace efforts to end the war in Yemen, which has killed tens of thousands of people and left 80 per cent of the population needing help.

European Efforts to Restore Reconciliation between STC and “Legitimacy” Fail