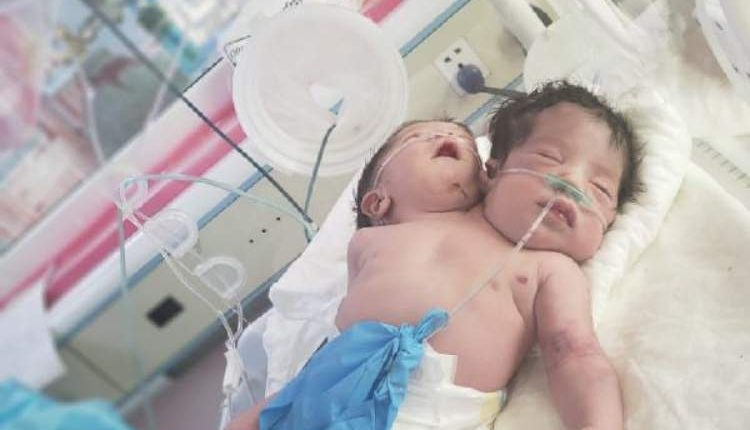 
Newly born conjoined twins were born at Palestine Hospital for Childhood and Motherhood in the capital Sana’a.

Medical sources said that a team at the hospital successfully performed a cesarean section for a woman who gave birth to conjoined twins connected from the chest and abdomen.

The health office’s director in the capital, Dr. Mutahar al-Marwan said the siblings are in a critical condition and in urgent need of treatment abroad due to lack of medical capabilities.

He added, their condition requires an airlift abroad for treatment in specialized and modern medical centers.

Al-Marwani pointed out that the blockade imposed by Saudi-led coalition on Yemeni ports and airports, and the destruction of health facilities, caused deterioration of medical services.

The blockade caused death of hundreds of children and women, and exacerbated the suffering of thousands of patients who are in dire need of travel for treatment abroad.

He blamed the United Nations and international organizations for the crimes of aggression and blockade.

They did not play their role in putting urgent pressure on the coalition to lift the embargo on Sanaa International Airport, in order to alleviate the suffering of thousands of patients, including the case of the conjoined twins, he said.

For her part, Dr. Athbah al-Barti, head of the team that performed the cesarean section, explained in a statement to Yemeni News Agency (Saba) that the 28-year-old mother’s condition is stable, and she discovered her pregnancy with female conjoined twins at the beginning of the seventh month of pregnancy.

She noted that the pregnancy was normal and stable, and she did not suffer from any chronic diseases.

Dr. Al-Barti explained that the twins have two heads, spines, abdomens, three legs and three hands, each one weighing 1 kg and 800 grams. They are in critical condition on ventilators in the nursery department, and need intensive medical care to ensure their survival.