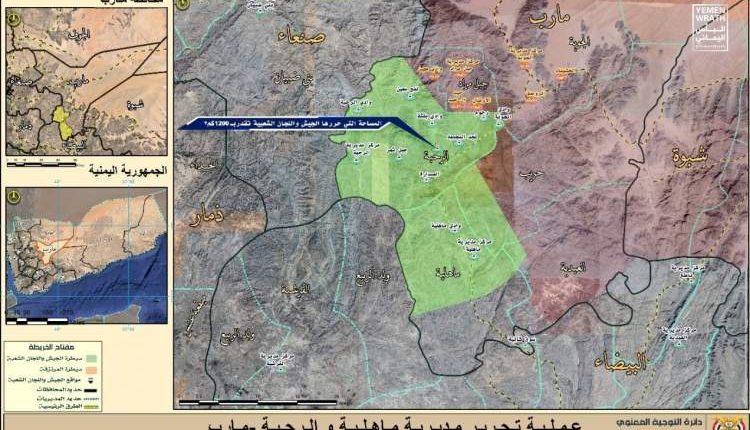 In a press briefing this afternoon, Brig. Gen. Sarie explained that the army and the popular committees managed to liberate the districts of Mahliya hand Rahba completely within the third phase of “Al-Nasr Al-Mubin” Operation.

The spokesman announced the liberation of a total area estimated at 1,200 square kilometers from the districts of Rahba and Mahliyah, indicating that the operation resulted in the killing, wounding and capturing of 151 Saudi-backed forces.

He confirmed that the army forces and the popular committees worked to normalize the life in the liberated areas with the participation of the local authority in Marib province.

Sarie praised the great role of the honorable tribes of Marib in the battle of liberation and independence in general, and the liberation of Marib province in particular.

He advised them to take lessons from the fate of mercenaries and agents in the other countries through the history.

“For six years, you have been working with the enemies of the homeland, offering them assistance, and practicing a criminal role and home treason, so what have you gained? Only the shame of treason,” Sarie said this afternoon in a press briefing, during which he revealed details of the large-scale military operation “Al-Nasr Al-Mubin” that led to the liberation of Rahba and Mahliyah districts in Marib province.

He added, addressing the fighters in the coalition ranks, “When will you be Yemenis with your people and country, and when will you be on the side of the homeland?”

The spokesman called for all the fighters in the ranks of the coalition to understand the lessons of history to know how was the fate of the “mercenaries” and agents in each country, noting the end of the mercenaries in Algeria, Vietnam and Afghanistan how the French and American occupiers abandon them.

Anssarallah Spokesman: Yemen Has Full Right to Retaliate Its…