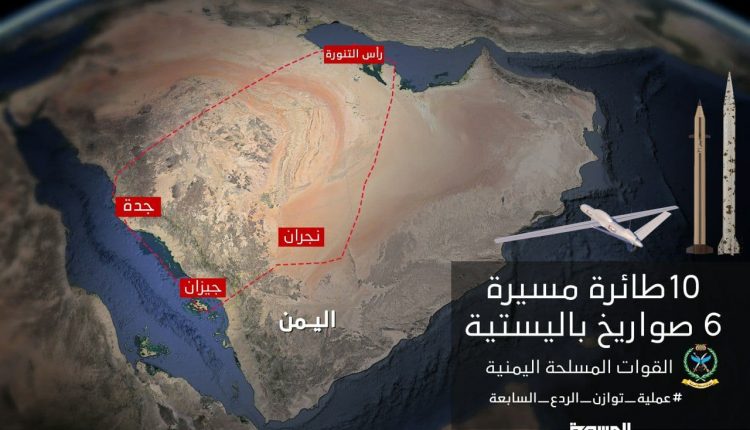 
Seven deterrence operations that have been carried out by the Sana’a forces on the most importance of the Saudi military and economic targets since the beginning of the war on Yemen in 2015.

In a report published by Yemen Press Agency, these operations have led to Saudi military and economic effects, as well as painful psychological impacts and defeat that the coalition forces suffer from.

On September 14, 2019, Brigadier General Yahiya Sarie announced in a news statement the missile forces targeted Abqaiq and Khurais oil refineries belonging to Saudi Aramco with 10 drones. He stressed that the attack hit its target accurately.

On February 21, 2020, the Yemeni forces carried out a qualitative operation that targeted Aramco and other sensitive targets in Yanbu province with 12 Sammad 3 drones, two Quds-winged missiles, and a long-range Zulfiqar ballistic missile.

At the time, Brigadier General Sarie called the operation “The Third Balance of Deterrence Operation,” stressing that it is a natural and legitimate response to the coalition’s crimes.

On June 23, 2020, the forces of Sana’a launched a large number of ballistic and winged missiles and drones on sensitive targets in the capital of Saudi Arabia, Riyadh.

In a statement issued by the Yemeni armed forces confirmed that the operation destroyed the Ministry of Defense and Intelligence, Salman Air Base and military sites in Riyadh, Jizan and Najran, which was carried out with a large number of ballistic and winged missiles, Quds, Zulfiqar, as well as several drones.

On February 28, 2021, the operation hit several sensitive sites in Riyadh with a “Zulfiqar” ballistic missile and 15 drones, including 9 Sammad-3 aircraft.

On March 7, 2021, the operation targeted the largest oil port in Saudi Arabia, in a joint offensive operation on the Saudi depth with 14 drones and eight ballistic missiles, including 10 Sammad-3 drones and the Zulfiqar missile.

Brigadier General Yahiya Sarie, the spokesman of the Yemeni army, the attack targeted Aramco in the port of Ras Tanura, and other military targets in the Dammam region, as well as four Qasef 2K drones and seven Badr missiles hit other military sites in Asir and Jizan provinces.

On August 05, 2021, the spokesman of the Yemeni army, Brigadier General Yahiya Sarie, announced an offensive operation was carried out against military bases in the Saudi depth.

The spokesman affirmed that the operation achieved its targets successfully.

Awakening Saudi Arabia from the illusion of victory

The operation 7th Deterrence carried out by the Yemeni army against the Saudi oil sites is a legitimate right to awaken Saudi Arabia from illusion of achieving victory.

The successful military operation carried out by the armed forces on Saturday in the Saudi depth, with eight Sammad 10 aircraft and six ballistic missiles on Aramco facilities Eastern Province of Ras Tanura in Dammam region, and other areas of Jizan and Najran and Jeddah, came within the framework of the legitimate response to the crimes of the Saudi-led coalition against Yemen, which various types of weapons have been used to destroy the infrastructures of the Yemeni people.

For seven years, the coalition has the strongest military arsenal and controlled a large financial and oil stock, has unable to achieve anything noteworthy on the ground. All its military attempts failed miserably in front of the heroes of the Yemeni army and popular forces, which it prompted many local politicians and military observers to wonder about the reasons for the complete impotence of the coalition and its catastrophic failure, which was inflicted on the coalition countries of by the blockaded army.

Now, the armed forces of the coalition’s countries are in a state of great collapse and the issue of recognizing and announcing it has become only a matter of time. They are living a kind of arrogance, and the time will come soon to admit defeat publicly to full view of the whole world.

Miscalculations that the countries of coalition relied on when we launched the war on Yemen, they thought that Yemen was an easy prey, and the issue of subjugating and controlling it in a few days, depending on a modern and large military arsenal.

Shortly after waging war, those countries began at the review of the wrong accounts; But they were too late, when the Yemeni army was able to turn the table by taking the initiative and directing painful blows to the countries of Saudi-led coalition that have not yet recovered from the shock and cruelty of defeat.