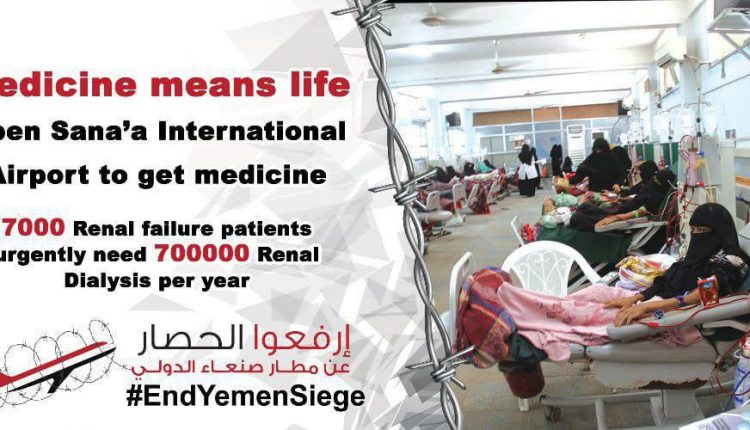 
Five years since Sana’a International Airport was closed, in front of civilian humanitarian and commercial flights with an unfair and unjust individual decision, taken by the Saudi state of coalition on August 9, 2016 without any reason to justify the closure of the airport.

Sana’a International Airport is the most important civilian airport and the first air outlet, which serves all Yemeni citizens, but the countries of the Saudi coalition insisted on keeping the airport closed to increase the suffering of the Yemeni people and isolate them from the world and turn Yemen into a big prison.

Nevertheless, the coalition deliberately targeted the airport in its first raids on Yemen, on the eve of March 26, 2015, focusing on passenger lounges, the main runway, lighthouses and other important places that enemy aviation turned into rubble.

According to a report issued by Ministry of Transport received by Saba that the stages of targeting and closing Sana’a International Airport began at dawn on Thursday, March 26, 2015 with four raids directly targeting the main runway and causing big damage.

The report explained that from April 6, 2015 to April 27 of the same year, the Authority restored and rehabilitated the tarmac, and allowing flights to evacuate foreign care from Yemen, while flights of the national carrier “Yemen Airways” were banned.

As Yemenis stranded abroad have been prevented from returning, and removing non-Yemenis trapped inside, including patients and students.

According to the report, on April 28, 2015, the runway at Sana’a International Airport was directly bombed which got it out of readiness.

In a procedure described by the Ministry of Transport as arbitrary and unjustified, on August 8, 2016, the Coalition closed Sana’a airport by decision of Saudi Ministry of Defense and banned all Yemenia Airlines flights until day.

According the report, Sana’a International Airport is receiving UN flights and diplomatic delegations, and all of them confirm the readiness of the airport technically and professionally.

The director general of Sana’a International Airport, Khalid Al-Shayef, said that the airport was subjected to more than 180 raids by the aircraft of Saudi coalition with the intention of getting it out of readiness, in addition 500 raids were targeted airport campus.

“Sana’a airport is the main artery serving more than 80 percent of the population of the Republic “, he said.

Al-Shayef explained that Sana’a airport suffered direct material losses of more than $150 million as a result of its closure and targeting of its runway, power plants, water and communication networks, navigational devices, navigational guidance device and some other equipment, while indirect losses exceeded $3 billion due to flight stops, revenues and closure of airport service offices.

He pointed out that before the war, it traveled daily through Sana’a airport more than 5,000 passengers to various countries of the world, including about 100 patients for treatment abroad.

British Seeks to Establish Military Base for Israel in Mahra