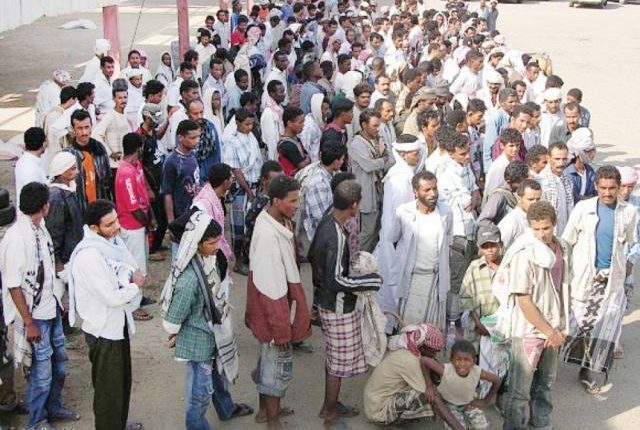 Expatriates confirmed that Riyadh prevented money transfers to Yemen except through a few banks, and with a limited amount.

This step would exacerbate the humanitarian tragedy in Yemen, where many families depend on the transfer proceeds they receive from expatriates outside the country.

A month ago, Saudi Arabia began deporting hundreds of thousands of Yemeni expatriates, on top of them academics and doctors.

On the other hand, an international organization revealed, on Sunday, the documentation of hundreds of cases of forcibly deported Yemenis from Saudi lands, in a move that may strengthen international moves to prosecute the Kingdom.

The International Federation of Yemeni Communities in the Diaspora said in a statement that it had received regular calls from Yemeni expatriates in Saudi Arabia, states that they are informed by their sponsors on the need to transfer their sponsorship or officially report on them to the authorities.

The federation indicated that most of the cases that were registered in the southern regions, specifically Jizan, Najran and Asir, where the Saudi authorities gave their citizens in these regions 4 months to end the work of Yemenis there in a move targeting nearly 800,000 expatriates.

The federation had revealed earlier that it had studied to prosecute Saudi Arabia, which is leading a war and an international blockade against Yemen, after its decision to target regular Yemeni workers, with the aim of targeting the remaining source of income for family’s dependent on expatriate remittances after destroying the economic fundamentals in this country.

Civilian Casualties Due to Saudi Bombing on Saada