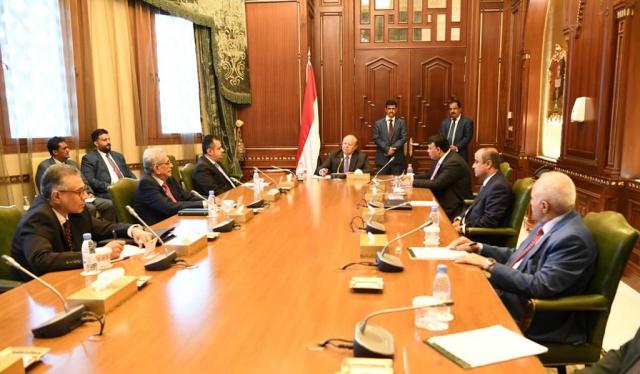 
Abd Rabbo Mansour Hadi issued on Tuesday, new directives related to the transfer of commercial bank centers from the capital, Sana’a, to Aden.

Leaving the future of the Yemeni economy’s backbone at risk, it threatens to wipe out what remains of the fragile economic system tributaries due to the systematic policies of destruction, what are the implications of this decision?

The latest directive, was not new in the economic war raging on Yemen, which began by targeting all the necessities of life, especially the economic sector, whose public and private facilities have been directly targeted by coalition aircraft over the past seven years of the Saudi-led war, but in terms of timing, it is a new card in the battle of starving Yemen. It comes in conjunction with parallel steps targeting all the elements of economic life or what is left from its arteries, the latest of which is raising the customs tariff and deporting Yemeni expatriates from Saudi Arabia, in addition to dumping the local currency with more counterfeit banknotes.

So far, Yemen seems resilient in the face of the conspiracy, in Sana’a and the areas under the control of the “Houthis,” the movement’s policy succeeded in confronting all these battles despite the military war raging on more than one front, and it is now considered the optimal authority at the level of Yemen in managing successive battles compared to the “legitimacy” areas where the population there is drowning in rampant costs, amid the interruption of income sources, they live in an unenviable condition. But regardless to the general policies taken by the authorities in Sana’a it is now the only defender on citizen’s right to live in freedom and dignity.

Hadi continues his devastating series to life in this important part of the world, especially in light of reports that speak on an international trend to transfer his powers, he is now implementing directives to target the banking sector, issuing orders to the Central Bank administration in Aden to take measures against the rejectionists, in an apparent blackmail to commercial banks, according to what has been issued by money exchange association in a statement.

Hadi has several goals in this step, whatever its consequences on the living situation of the citizen, the first of which was as he mentioned during his meeting with the bank’s management and the head of his government, to save his bank accounts in commercial banks after Sana’a recently exposed one billion Saudi riyals in one account in Tadhamon Bank. A clause has been allocated in directives to central bank of Aden to recover those accounts from commercial banks, and closing it after withdrawing its balances, cause if it stay in Sana’a does not give him control over his assets in light of the censorship imposed by the authority there, on the other hand, he is trying to convince Saudi Arabia that he is still fit to stay in power for a new period by implementing its agenda aimed at bringing Yemenis to their knees by destroying their last lifeline, the third and most important, as the Central Bank mentioned in a previous statement, is the creation of parallel banks affiliated with it.

Whatever Hadi’s goals are and it is a long list, there are risks that may result from the decision to move operations centers from Sana’a, the first is that the government intervenes in the decisions of banks, especially with regard to their positions, it contradicts with Banks Law, which authorizes its administration only to determine its location, and secondly, that the current environment in Aden in light of chaos and regionalism may make many commercial banks vulnerable to attacks and looting, as happened with many banks during the past years, the most important thing is the inability of the employees from the north to work in an environment that is repelling as Aden this means that these banks need new cadres, which is a difficult process to achieve in a short time. But the most dangerous thing remains linked to the Transitional Council and its tendencies to restore the state, this means taking over the banks’ stocks and management, and possibly nationalizing them in the future, similar to the socialist state that currently forms its structure.