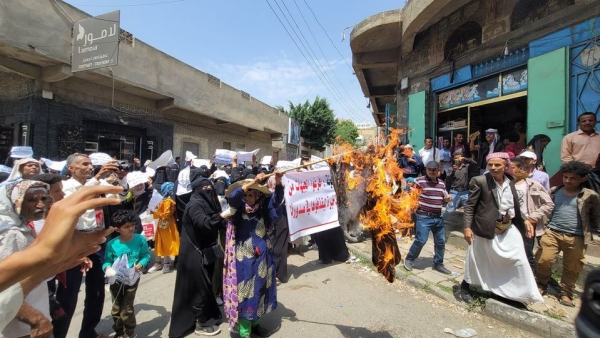 
The “resistance and national army” factions in Taiz carried out new and horrific crimes against citizens, who roamed the city’s streets, denouncing its massacre against “Al-Harq” family, and ignoring the attempt by its leaders to camouflage its activity again with media steps.

Prominent journalist and writer, Fikri Qassem, revealed that his family assaulted by Bakr Sadiq Sarhan, the most prominent gang leader in the city, and that was after the son of the commander of 22nd Brigade, Mika, and the most prominent commanders of his battalions looted a citizen villa in Al-Jahmalia neighborhood.

In an article on his official page, Qassem reviewed the extent of his suffering since Sarhan’s son lived in the looted house next to his house, noting that his life turned into hell and that his car was not spared from harm.

On the same front, local sources reported that Axis forces stormed led by a leader in Islah named Arafat Al-Sharabi, stormed a house of a family, and kidnapped a girl whose family refused to marry him off after learning his involvement in drug trade.

The sources reported that Al-Sharabi transferred the girl to an unknown destination and supported by several military crews.

These operations and others that were not disclosed for fearing from militias punishment, or because her cases did not reach the media, it comes at a time when the city is still in real shock from the genocide committed by these factions which is belong to Islah party against “Al-Harq” family, after the latter’s attempt to confront the looting of its lands in Ammad area of Bir Pasha district.

In this context, hundreds of angry people roamed the city streets to condemn the crime and demand the trial of the “resistance and national army” leaders factions involved in the crime.

The participants in the demonstration staged a vigil in solidarity with Al-Harq family in front of their house, before they set out on a march to the front of the axis gate demanding the departure of militias and to bring their leaders to trial.