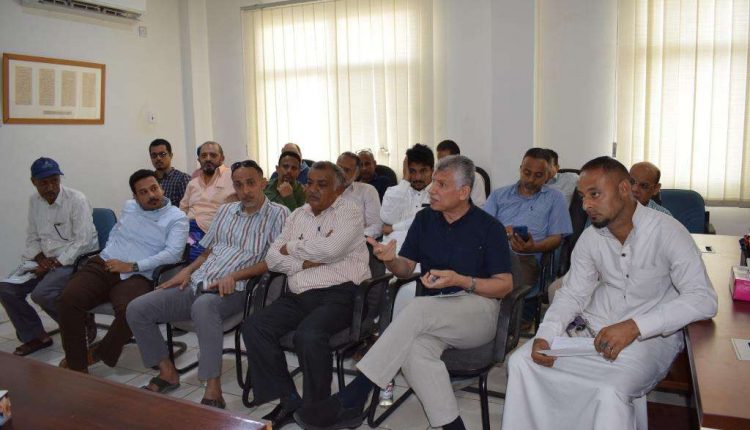 
The Chamber of Commerce and Industry in Aden approved, on Sunday, the extension of the decision to stop the entry of materials through the ports under that under the control of “legitimacy,” threatening to escalate at all levels, denouncing the government’s refusal to back down from doubling the customs tariff and its lies about foodstuffs.

In a statement after a meeting of traders in Aden, the Chamber of Commerce reported that it continued to stop the entry of materials through the port of Aden, the main port in the south of the country, despite their accumulation in the port.

It also threatened to escalate to a general strike and to file a lawsuit against Hadi government.

The meeting revealed the failure of the Chamber’s efforts to persuade Hadi government to reach an agreement on the customs tariff, noting that the decision to exclude foodstuffs, as Hadi government claimed, is still uncertain.

The Chamber indicated that it will form a committee to continue negotiations before resorting to escalation.

The Prime Minister of Hadi’s government renewed his adherence during a meeting of Economic Council to double customs dollar exchange to 500 riyals to the dollar instead of 250.

The decision has so far caused a significant increase in food prices, especially in “legitimate” areas, as those areas get close to starvation due to the suspension of salaries and the collapse of the currency and services up to raising tariffs.

The land and seaports under Hadi’s control remain closed due to traders boycott because the latest decision on customs tariffs, while others began heading towards Hodeida ports under the control of Houthis, especially with the announcement of Sana’a authority to provide customs facilities and privileges for merchants wishing to use its ports, including those working in “legitimacy” areas.