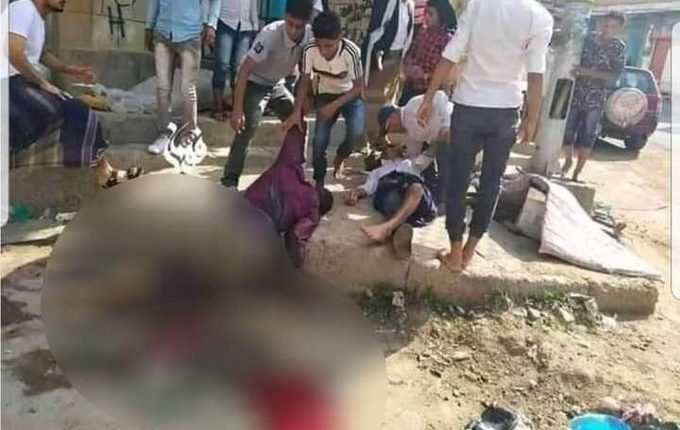 
Media sources revealed that Taiz axis of legitimacy participated in the liquidation and killing of an entire family in support of land looting gangs.

Taiz Street platform said that the crews of the axis burned the house of Issam Al-Hareq and arrested a number of children, where his body was found on Wednesday morning, dumped near to Al-Karamah Hospital, after he was kidnapped last night by military crews of Taiz Axis Command, loaded with members of lands-looting gangs.

Eyewitnesses confirmed that members of the military crews stormed the homes of Issam and Abdo Al-Harq, and setting fire to Abdo’s house while his wife and children were at home, which led to the injury of his wife.

Sources added: They arrested women and children and arrested a number of family members.

Ammd Beer bashah area in Taiz center witnessed Tuesday, violent clashes with various weapons among land-looting gang, it is led by the officer in Taiz axis, Majed Al-Araj, and between Al-Harq family, one of whose members is deputy director of Beer bashah Police Department, after Al-Araj military gang assulated on a land behind Abdu Seif in Beer bashah market, which Al-Harq family sold it to Saddam Al-Amiri, and were asked to enclose it.

The land according to a local source, was inherited by Al-Harq family from their late father, Muhammad Ali Al-Zakri, nicknamed “Al-Harq”, who was one of the senior notables in Ammad quarter, and they have been a resident of Ammad in Beer bashah for decades, he said.

Al-Araj gang, which enjoys the support of Brotherhood’s military ruler of Taiz, Abdo Farhan Al-Mikhlafi “Salem” and the leadership of Taiz axis, are looting lands in the city and committed many crimes.

The local source indicates that a year ago, Al-Araj gang tried to take the land, however, Issam and his brother Abdo prevented them from doing so, the gang returned again yesterday and the disaster occurred, in which Essam and Abdo were killed, in clashes with Al-Araj and his gang, Al-Araj, and his brother and another of his companions were also killed. Khaled Al-Harq was also injured, according to information said he was liquidated inside Al-Barihi Hospital after he was taken there.

Majed Al-Araj is considered one of the most prominent officers of the Axis Brigades who specialize in seizing citizens’ lands, and he enjoys great support from Hamoud Saeed Al-Mikhlafi and Abdo Farhan Salem.

Al-Araj, according to the information documented by Taiz Street, attacked Al-Shaibani Factory before three months ago, and a main partner with Fouad Fadel, the brother of Taiz axis leader, “Khaled Fadel”, along with Akram Al-Sharabi, in looting lands in Al-Dabab area, and  attack on the grounds of the former governor of Taiz, Amin Mahmoud. He participated with the commander of Al-Dabab Brigade, Fouad Hassan, in seizing the lands of citizens in Al-Maliha, line 30, and has running and fighting tours in looting lands of citizens in Alammad and Alhasab areas.

A woman from Bait Al-Haraq sent a message late yesterday evening to the public opeinion, revealing what she and her family had been subjected to in terms of abuse and killing at the hands of looting lands gangs supported by Taiz Axis forces.

“Majid Al-Araj attacked us, attacked our house and homes of my uncles, Alharaq family. They attacked our sold land and the rest of the square is our right. He came with battalions and armed men assaulting, he is wanted by security forces, everyone knows him and the cases of corruption are in the courts.

My father and uncles came out to reason with him in a friendly manner, but Majed Al-Araj dealt with them with weapons, he and his gunmen killed three of my uncles, they say that three of my cousins are in critical care, a self-defense event, and it was said that Majed died.

Then gangs came and attacked our homes, they stole everything in our house, they did not even respect women and kidnapped two young cousins of Issam al-Haraq until now, I do not know where are father and brother, are they alive, dead, or kidnapped?

I fled and the gunmen are still looking for any member from Alharaq family, they want to kill anyone belongs to Alharaq house.

Unfortunately, it was announced that Majed Al-Araj was killed, as if he is the victim and the hero and we are the killers and aggressors!!!

I hope you let people know the truth and a committee must go to the site and ask people what happened and who attacked, see how they looted our homes and our land, my uncles were killed and my cousins were injured, they kidnapped children and abuse women, I do not know the fate of my father and brother, I am alone!

I wish they would do us justice and a committee would go to the crime scene, in Alammad quarter, behind Al Sharq Tile Factory and know who is aggressor, and he has criminal record.

My father and brother, I do not know their fate, alive or dead, and the injured are my cousins in Al-Barihi Hospital, I receive news that Majid Al-Araj’s gang wants to liquidate them in the hospital.

This is a disaster and a tragedy that my family are dying, women, and children are displaced. Please take my case to the people.” A message from one of AlHaraq family women said.

Houthia Shoot Down US Drone over Marib