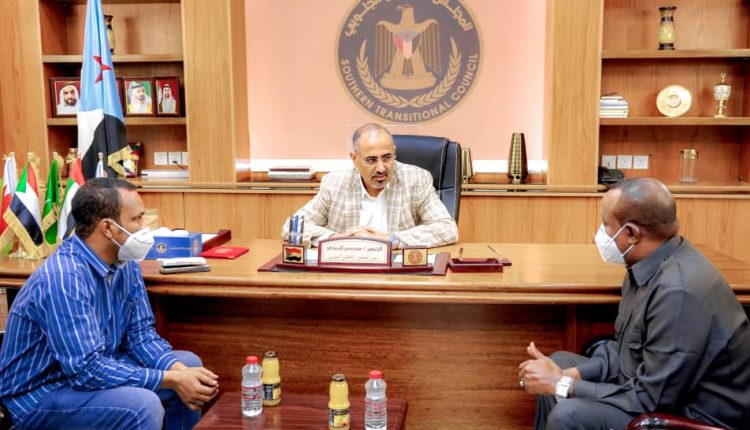 
The head of the UAE-backed Transitional Council in southern Yemen revealed, on Monday, diplomatic moves to support the council’s authority in Aden, in a step that was considered, in terms of timing, as a confirmation to the orientations of ending “legitimacy.”

This came during his reception to the Ambassador of Federal Republic of Somalia; it is the first Arab country other than UAE to recognize on STC’s authority in Aden.

Al-Zubaidi in his speech to Ambassador Abdullah Hashi Shoreh, praised Somalia’s opening of its embassy in Aden, as the first Arab country, reviewing what he described as the historical relations between the country of the south, “under construction” and the “brotherly” state of Somalia.

Although the meeting does not carry much for STC at the level of the internal, regional and international situation, given the situation in Somalia not far from Yemen, but the meeting in terms of timing carries Emirati messages to Hadi, especially as it came after Hadi tried to return to the scene in a meeting with his entourage in Riyadh, amid news talked that UAE leadership is in its way to transfer hadi’s authority to a consensual deputy or a presidential council.

Al-Zubaidi’s statements came in light from coalition indicate a consensus between Saudi Arabia and UAE on granting STC power in the south within the framework of arrangements for a two-region solution that excludes Hadi and his legitimacy.

No Dialogue before Reopening Airports and Ports: Abdulsalam