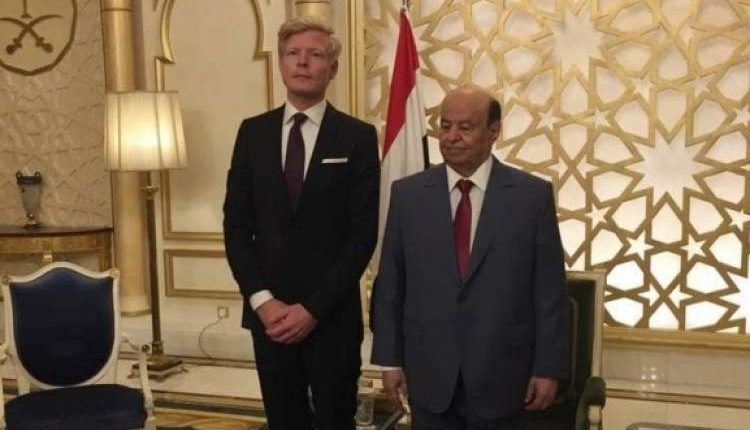 
The spokesperson of UN Secretary-General, Farhan Haq, announced the Swedish, Hans Grundberg, as the fourth international envoy to Yemen, at the same time, Yemeni regional and international parties rushed to comment on the appointment of the former European ambassador, but they all differed about the task which he should begin, what is the possibility of Grundberg succeeding in the task that the three international envoys before him have failed in it, along with a Swedish and an American envoy, to move the stagnant waters, in a quagmire that Saudi Arabia dug 7 years ago with unlimited international support?

According to Farhan Haq, Grundberg, who held several diplomatic posts for about 20 years, has a lot of experience in resolving the situation, but apart from the recommendations of Secretary-General Antonio Guterres, the situation of the Swedish diplomat appears to be more complex than his predecessors, Martin Griffiths, or even Jamal Ben Omar and Ismail Ould Cheikh, who were not dependent on countries that have diplomatic and military weight at the international level, and these complications are not limited to Hans’ record, which is devoid from any presence, despite his recent position as ambassador to the EU, except personal meetings, rather, according to the 6-year process of diplomatic and political movement held with the force language.

These complications part of it emerged in international, regional and local reactions, apparently carried support and encouragement for Hans and inside it contains many details that are impossible to achieve at once, the most prominent of these is the American attempt to keep the new envoy as a personal companion to its envoy to Yemen by focusing his attention to Marib, those in which the US with its political weight and military power, failed to achieve any agenda in it, followed by the British endeavors that eager to stay in the Yemeni scene and what remains its interests, which may turn into a British-European conflict that will transfer their differences over the post-Brexit situation to Yemen, add to that Saudi Arabia, which is trying to maneuver with references and aims to pass its agenda through the initiative, which it sees as a face-saving solution in Yemen, on top of this, the factions loyal to coalition, each of them trying to sew the political solution according to its own interest, like Hadi, whose government stipulated a statement by his Foreign ministry that he must remain in power, whose legitimacy is based on a Security Council resolution as a condition for cooperation, and the Transitional Council, which demanded to focus on the southern issue. Regardless to these parties that have become a margin in the equation, there is the strongest party represented by “Houthis” in Sana’a, which appears from the recent events map as they are on the path of “liberating Yemen.” away from  external movement, which they have not always relied on much, after most of the countries was involved in one way or another in the Saudi-led war in 2017, despite keeping the window of peace open, but according to the foundations in which they see the preservation of Yemen’s dignity, sovereignty, unity and independence, and those foundations with what the Foreign minister in rescue government spoke begin with lifting the siege and stopping the “aggression” reaching a ceasefire and entering into negotiations that pave the way for a political solution.

Contrary to what is being put forward by local, regional and international parties in the statements welcoming Grodenberg to Yemen fold, there is something going on behind the scenes, media sources talk that its content is turning the page of “legitimacy”  by transferring its powers to an agreed deputy or a presidential council, and this step, even if it was measured according to an agenda promoted by UAE and with American, and minor British participation, however, it may achieve a breach at least by returning the parties to the negotiating table, in view of insinuations made by officials in Sana’a government as part of an offer to Saudi Arabia that includes an agreement between the two parties away from what Hussein Al-Ezzi, Deputy Foreign Minister of  rescue government described as “mercenaries.”

Also, this dish that is prepared on a quiet fire and away from the lights may enable the new envoy to offer something new, compared to its predecessors who used to repeat the cease-fire series in exchange to facilitating the entry of foodstuffs coming to negotiations for a comprehensive solution, and that trail is more harmful than good for  Yemenis who are meant to continue their fight away from the spotlight, to facilitate their weakening and the onslaught of international and regional powers to achieve their agenda.