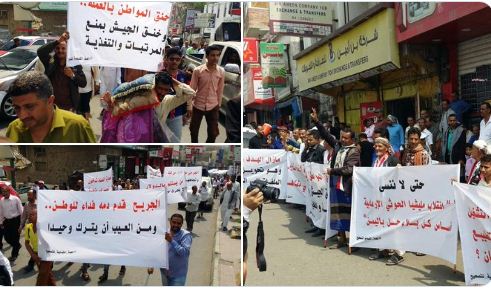 
Hadi government announced at the end of last week, the infusion of a large amount of recently printed banknotes, in a move that may exacerbate the collapse of local currency and wears down the citizen economically.

This coincides with popular anger sweeping the areas of legitimacy after its recent decision to raise customs tariffs, amidst indicators of a hunger revolution.

The Central Bank in Aden said in a statement that it had started pumping a new one thousand riyals from the old currency into local markets.

Hadi government had printed nearly half a trillion riyals of this category after it failed to pass the new category, from which billions of riyals were printed over the past years and caused a collapse in the prices of local currency.

According to economists, the new pumping may push the exchange rates to jump to a new step, especially in light of news talking that exchange rates in Aden reached during the last hours 1050 riyals against the dollar.

This step would also achieve a new jump in the prices of commodities and foodstuffs, especially since it came only two days after the decision of Maeen government to double the customs tariff in the port of Aden. This means adding millions of Yemenis to the list of starvation and blowing up a hunger revolution, its indicators have emerged during the past hours with demonstrations in Taiz and calls in Hadhramaut for a labor escalation.

Hadi’s step in terms of timing indicates that it has adopted the shock therapy method to counter any popular reaction towards the decision of customs tariff by fleeing to pumping more printed currencies outside the monetary coverage.