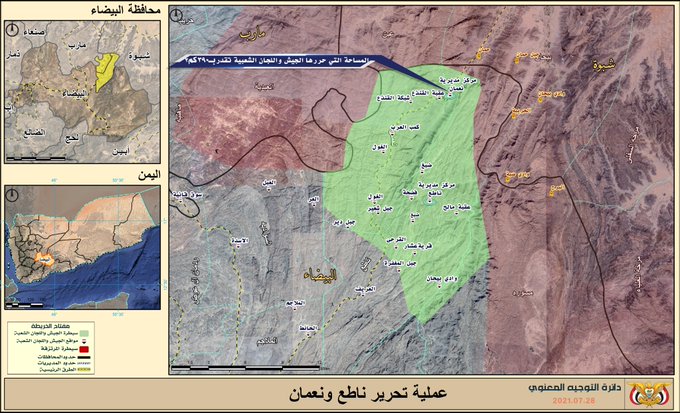 
The official spokesman of Sana’a forces, Brigadier General Yahya SarIe, announced on Saturday that the operation “Al-Nasr Al-Mubin” in its second phase led to the liberation of the districts of Na’man and Nata’a in al-Baidha province, with an area of ​​380 square kilometers.

Sarie said in a press briefing today that the second phase of the operation, which began on July 20 and lasted for several days, achieved all its objectives, foremost of which is the liberation of other areas of al-Baidha, inflicting heavy losses on “the Takfiri gangs of the so-called ISIS and Al-Qaeda.”

He confirmed the killing of 160 Takfiri elements, wounding more than 200, and capturing dozens of them during the second phase of the operation, in addition to damaging and burning dozens of vehicles and armored vehicles and seizing various quantities of weapons.

He stated that the losses of the Takfiri gangs amounted to 510 dead and 760 injured during the two phases of the operation, which   the various units of the armed forces participated in its implementation.

The spokesman confirmed that the armed forces, with the support of the people of al-Baidha province and its honorable tribes, would continue to cleanse the remaining areas of these elements.