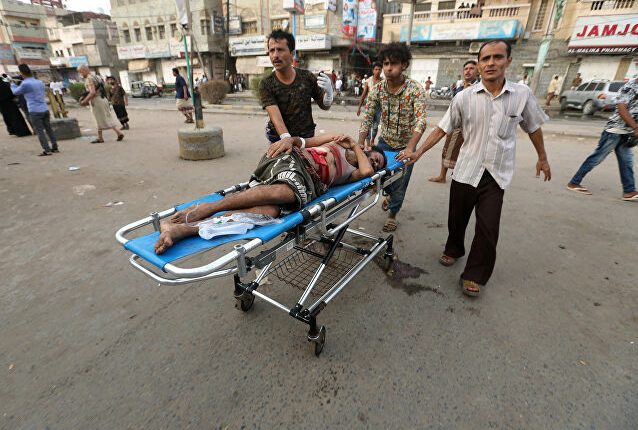 
The Human Rights Office in Hodeidah province revealed that the forces of Saudi-led coalition commit more than 170,000 violations, resulting in more than five thousand and 394 dead and wounded children, women and men.

the Human Rights Office in the province, on Thursday held a press conference about the human rights situation as a result of the Saudi-Emirati war against Yemen.

At the conference, the Director of the Human Rights Office in Hodeidah, Zain Abdullah, reviewed the human rights situation since the beginning of the war until the current year.

He pointed out that the violations of the Saudi coalition exceeded 170,000 violations, resulting in more than five thousand and 394 dead and wounded children, women and men.

He explained that the total economic facilities that were targeted by the coalition were four thousand and 255, which included factories, fuel tankers, commercial establishments and farms, in addition to means of transportation, fishing boats, food stores, markets, gas stations and food trucks.

At the press conference, the Acting Minister of Human Rights in Sana’a government, Ali Al-Dailami, praised the great interaction that Hodeidah is witnessing through denouncing and condemning the crimes and violations committed by the coalition and its sponsored forces.

The continued targeting of Hodeidah province, which is the main artery of life in Yemen, was considered targeting more than 70 percent of the population.

Al-Dailami stressed that the blockade is one of the most prominent crimes committed against the Yemeni people, especially preventing the entry of oil derivatives ships, especially diesel, which is used to operate power plants, and the human suffering that this causes for citizens in the province, especially with the summer heat.

He touched on the crimes and violations of human rights against civilians by the countries of Saudi coalition and their loyal forces along the western coast.

The Acting Minister of Human Rights indicated that the crimes of the Saudi-sponsored forces affected hospitals, health facilities, fish landing centers, water and electricity projects, farms, bridges, and others. He denounced the silence of the international community and human rights organizations regarding these crimes.

He called on citizens who have suffered damage and heavy losses in lives or property to go to the judiciary and file lawsuits for the crimes committed against them by the Saudi coalition and its backed forces.

At the conference, which was attended by the Chairman of the General Authority for Zakat, Sheikh Shamsan Abu Nastan, the province’s two undersecretaries, Ahmed Al-Bishri and Muhammad Helisi, reviewed the unprecedented humanitarian situation in Hodeidah as a result of the war, and the crimes it commits against civilians, especially children and women.

They pointed out that the last of these crimes was Wednesday evening, which resulted in the death of a woman and the injury of a child in al-Tuhayta district as a result of being targeted by Saudi-backed forces.

Al-Bishri and Halisi explained that the coalition of Saudi coalition directly targeted all service institutions, including drinking water projects in a number of districts, especially Kamaran Island, as well as targeting hospitals, health facilities, fish facilities, roads, bridges, farms, communications, schools, vocational institutes and everything related to life in the province.

At the conference, which was attended by Assistant Undersecretary Ghaleb Hamza and Advisor to the Minister of Human Rights Hamid Al-Rafiq, the director of the branch of the Supreme Council for the Management and Coordination of Humanitarian Affairs and International Cooperation in the province, Jaber Al-Razhi, reviewed the humanitarian situation as a result of displacement, in addition to the issues of the displaced and the severe lack of response and organizations’ handling of the humanitarian situation of the displaced.

He indicated that some of the humanitarian aid imported by these organizations is expired or damaged due to poor transportation and storage, including medicines, legumes, oil, flour and others.