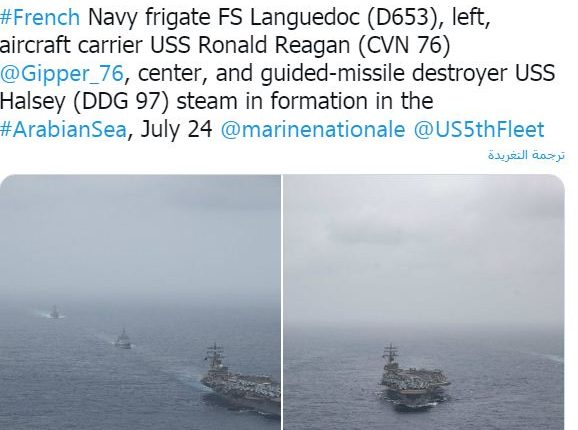 
US and French forces conducted joint military exercises on Wednesday, for the first time in the Arabian Sea, off the eastern coast of Yemen, in conjunction with the approach of Houthis to the most important oil areas east of the country, that operated by oil companies from both countries.

US army central command published on its social media page pictures of warships sailing in Arabian Sea off Yemen.

The US command stated that the maneuver took place with the docking of French frigate “Languedoc” with US aircraft carrier “Ronald Reagan” and the American guided missile destroyer “Helsey”.

The United States did not specify the purpose of this military maneuver, but its timing indicates to the fears escalation by US-French from Sana’a forces advance, which are preparing to enter Marib city towards the province of Shabawah, with the arrival of the vanguard of his forces to Bayhan district, the American Hunt Company manages the most prominent oil fields in Sector 19 in Asilan region, not to mention the French company Total, which runs Balhaf Company, the largest liquefied gas production facility in Yemen, amid indications of direct intervention in the battles, expected to break out there.

The successive advances of Sana’a forces in the province of Al-Baidha and Shabwah, which are rich with natural resources, raised the fears of the French Republic; this was evident in its media outlets.

Yemeni sources said in statements to French 24: Sana’a provided its positions in Bayhan district with significant reinforcements; it is the first district of Shabwah province after it took control of large districts in Al-Baidha.

The French channel described Sanaa’s advances as a major threat to Hadi government, however, this French interest stems from a real threat to France’s interests in the province, because it manages LNG production sites in Shabwah through Total Company.

It is worth noting that Sana’a had taken control on the first districts of Shabwah on the impact of the great victory of its forces in Al-Baidha against both Al-Qaeda and Saudi coalition.

Sana’a Calls on Citizens Targeted by Coalition to File Lawsuit