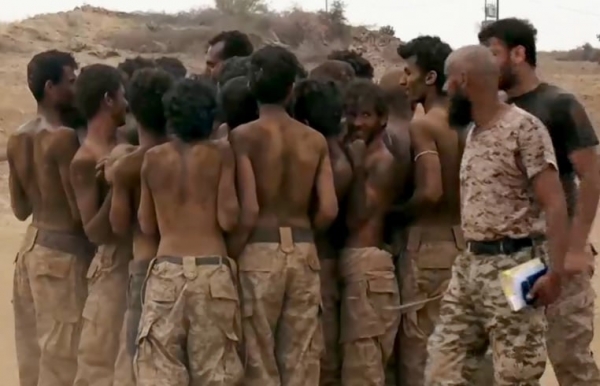 
The Voice of Prisoners platform, concerned with the prisoners and missing persons of the legitimate forces, unveiled the names of new victims, who recruited by Saudi Arabia to fight in the border.

The platform, in its Facebook page, said that it had received an appeal from the families of two missing persons in the Saudi camps.

According to the platform, Hizam Muhammad Ahmad Al-Sudi said that his son and nephew went to enlist in the border guards, they were taken to Saudi Arabia through Al-Wadeah port for training in one of the Saudi camps in Al-Khamis area, during the training period, a verbal altercation occurred between his son (Sadiq) and a Saudi officer in the training ground, where the Saudi officer slapped the recruite (Sadiq) in his face, which led to a strong reaction from (Sadiq) and he wanted to slap the officer in return. The trainers gathered and beat him, so his cousin (Qahtan) came and tried to help him, but the Saudi officers summoned one of the crews. After beating them, they have been handcuffed and threw them to one of the crews, and that’s where they ended up, no one knows where they took them, and what happened to them to this day.

According to AlSodi the recruits are,

From the sons of Amran province.

The platform spoke earlier that there are hundreds of detainees in Saudi prisons, their fate is not known.