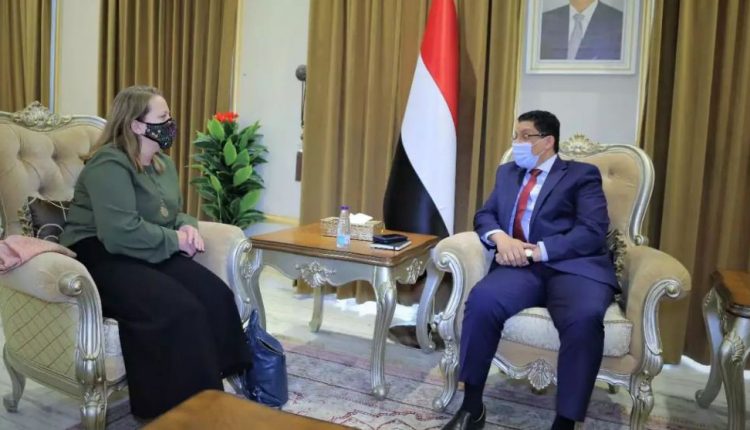 On Eve of Military Landing in Aden, US Sends New Warning to STC


The United States of America issued a new threat to the Southern Transitional Council (STC), which is loyal to UAE, in south of Yemen.

This coincides with news of new US forces arrival to his stronghold in Aden to support the Saudi forces there.

The Chargé d’Affairs of US Embassy in Yemen, Catherine Westley, called on the Transitional Council to stop all forms of escalation and return to the negotiating table in Riyadh.

This came during a meeting with Hadi’s Minister of Foreign Affairs, Ahmed Awad bin Mubarak, in confirmation to its support for Hadi government, which is facing dangers in light of the transitional escalation in the east.

The US diplomacy affirmed her country’s support for Yemen’s unity.

Wesley’s statements are the second in less than a week, where she had previously threatened with international sanctions in response to STC demonstrations in the Oil Crescent of Yemen, specifically in Shabwah and Hadhramaut.

Although STC is trying, through the demonstrations, to strengthen its presence in Hadi government however, the American threat, in conjunction with French – British – Saudi threats, reveals the extent of anxiety and fears about any development in areas run by oil companies and the “legitimate” leaders are trying to provide them protection.

What distinguishes the new American threats is that it coincided with news of the arrival for a batch of American forces that withdrew from Afghanistan to Aden, in preparation for its transfer to the strategic Al-Anad base in Aden Gulf.

According to media sources, the new batch of US forces includes about 300 soldiers and armored vehicles, as well as military helicopters. Noting that these forces were transferred from Socotra to Aden airport and then to a base for Saudi forces at dawn.

The United States had preempted the arrival of these forces by moving al-Qaeda file, marketing allegations about the transfer of Egyptian and Sudanese leaders to Yemen.

The last of them are the Egyptian Ibrahim Al-Banna, for whom US Treasury offered $5 million for information on him, and the Sudanese Ibrahim Al-Qawsi, in whose name it allocated $4 million. This indicates that US, which repositioned its forces withdrawing from Afghanistan on the coasts of Somalia and Yemen, wants to justify a long-term military presence, especially after it announced the formation and support of factions loyal to it in Yemen.

New Statistics of War Crimes in Yemen during 2300 Days