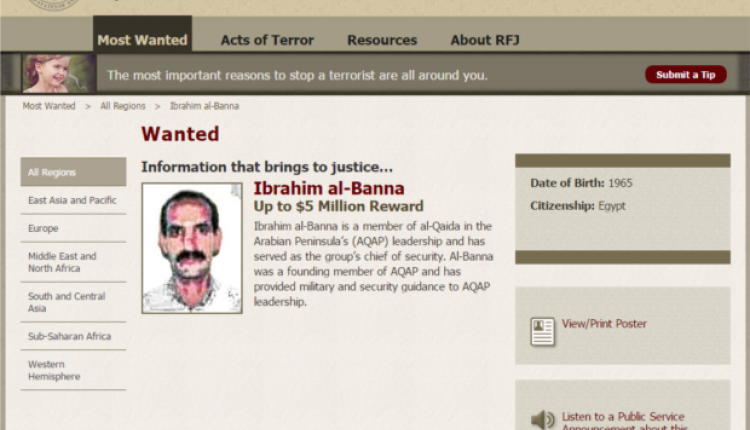 US Continues to Booby Trap Yemen with Al-Qaeda


The United States continued to move Al-Qaeda file in Yemen, within a long series that has recently increased in pace and aims to justify a long-term military presence in the south and east of the country.

US State Department has allocated five million dollars for information leading to al-Qaeda leader Ibrahim al-Banna, an Egyptian national. Noting that Al-Banna is among the leaders who fled to Yemen.

Al-Banaa is a consultant for security and military operations and a founding member of the organization in the Arabian Peninsula, according to US State Department tweet.

He is also the second leader in the organization from African origin that United States announces his escape to Yemen, after the Sudanese Ibrahim al-Qawsi, who US Treasury allocated earlier last month a reward up to four million dollars for anyone who provides information on him.

The United States’ move to al-Qaeda file in Yemen coincides with the beginning of establishing special units for them in southern and eastern regions of the country under the name of “fighting terrorism”, most notably the special operations units, the border guards and the coast guards, which US Department of Defense announced its support again, and indicates that US, which has just resettled its forces withdrawing from Afghanistan, after more than 20 years of existence there under the pretext of fighting terrorism in coastal areas in Yemen and Somalia, it seeks to justify a long-term presence in the most important regions of Yemen, a wealth and a strategic location on the international shipping line.

The step also carries in terms of timing dimensions related to the movement of Al-Qaeda stationed in Al-Baidha province, where United States blew up a new war there. In an attempt to pressure on Sana’a to accept a peace agreement formula, that does not meet the aspirations of the Yemenis.

US Forces Arrive in Aden