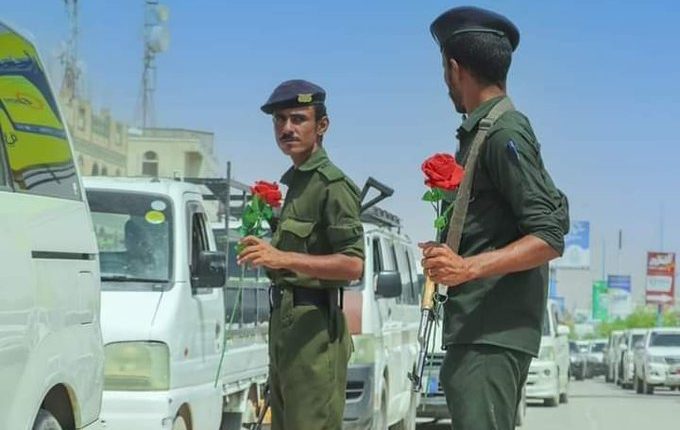 
Islah Authority in Shabwah and its factions intensified their social movement in an attempt to flirt the public street in the oil province, before the start of an uprising organized by its opponents on “Land Day.”

This indicates the party’s fears of the repercussions from the new Emirati-backed transitional moves.

Party members distributed red roses to vehicle drivers in the streets of Ataq and major cities, this coincided with launching a campaign by Islah Authority and its supporters in the province, which is witnessing rising tension “Security is our responsibility” campaign, this is in response to STC’s mobilization for demonstrations at the district level, expected to kicked off in Aden.

The process of distributing roses coincides, which sparked widespread controversy among the people of the southeastern province, amid criticism of STC supporters, which they considered it a prelude to suppression their demonstrations with bullets, with the announcement of Islah authority, an agreement concluded with Al-Qaeda, according to which an officer and recruits from the criminal investigation were released. They were kidnapped by the organization for more than a week, amid accusations to Islah of being the masterminding of their kidnapping and transfer them to Al-Baidha, the stronghold of Al-Qaeda.

It also comes at a time when partisan media has begun marketing to the opening of Shabwah International Airport, and the talk about the conclusion of a new agreement by the governor and the leader of Islah, Muhammad bin Adyo, to create a runway at the dirt airport, which has been closed for years.

These developments come on the eve of Islah opponents continuation movements in the most important province, on more than one front to turn the table on him in his most important strongholds, as the transitional factions continued to mobilize at the district level for demonstrations that have been mobilizing for weeks, through it, the transitional aims to respond to its awful defeat in Abyan a few days ago, This indicates Islah attempt to calm the congested street, as a result of his factions practice against the tribes and their sons and to prevent the transitional incursion.