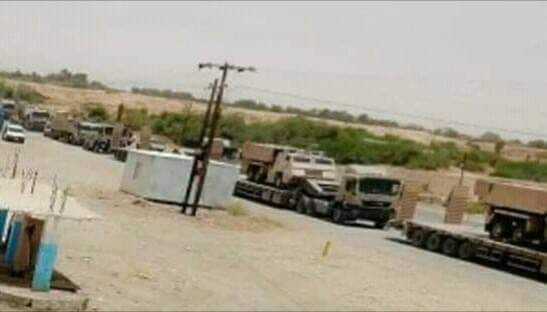 Marib city the last stronghold of the war coalition in northern Yemen, witnessed on Tuesday, military developments that predicted imminent control of Sanaa forces to the city, amid signs of a gradual withdrawal for coalition.

At the field level, local sources reported that coalition forces began evacuating military communications network from camps in the city, in conjunction with evacuating those camps from the Saudi forces.

The sources explained that four military vehicles for “electronic warfare” and equipped with advanced military techniques for penetrating communications and espionage networks were seen leaving the Sahn al-Jin camp in Marib, accompanied by armored vehicles and crews, towards the al-Wadi’a border crossing between Yemen and Saudi Arabia.

These moves coincided with news about Saudi directives to its officers in the city to evacuate Tadaween camp, from which the confrontations are approaching.

The western outskirts of Marib city witnessed during the past hours violent battles that resulted in the advance of Sana’a forces in Al-Balaq tribal area overlooking the city.

Although coalition aircraft launched more than 30 airstrikes in an attempt to impede the advance of Sana’a forces.

The coalition raids expanded in the last hours to include the provinces of Saada, Al-Jawf and Hajjah, in an indication to coalition’s attempt to pressure through targeting the border provinces, which are the stronghold of Anssarallah, in an attempt to pressure towards stopping the progress in Marib, especially in light of Sanaa’s success in neutralizing aviation through the deployment of defensive systems in the advanced lines, which resulted in downing two American drones. In less than 48 hours, what may complicate Saudi Arabia’s mission to prevent the fall of Marib by imposing an air belt around the city.

These field developments coincide with Reuters news agency quoting on informed sources, confirming that Saudi contacts with the Sultanate of Oman, on pushing for a new round of negotiations with Sana’a, in order to postpone the resolution of Marib file, which indicates that Saudi Arabia has become aware from imminent fall of the most important city in the current war on Yemen.