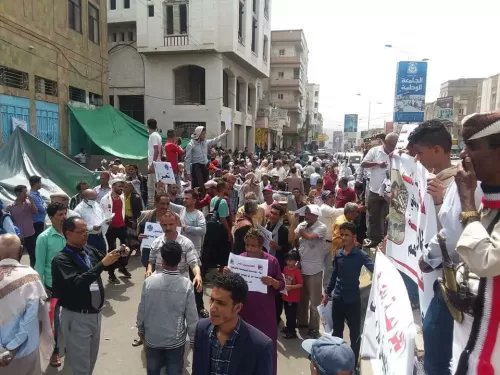 The popular protests in Taiz brought back the case of the forcibly disappeared, Ayoub Al-Salihi, and his companion Akram Hamid to the surface again, after nearly six years of their arrest and disappearance in secret prisons of Islah.
The participants in the demonstration, which took place at the local authority headquarters on Jamal Street in the city center, raised pictures and banners for the forcibly disappeared Ayoub Al-Salihi and Akram Hamid, calling on Islah leadership and the legitimacy authority to quickly reveal on their fate and bring those involved in their kidnapping and disappearance to justice.
The demonstration also called for an international commission of investigation to reveal the fate of the forcibly disappeared in the prisons of the parties, the different and conflicting factions in the province.
Ayoub al-Salihi, a youth leader in the Socialist Party and one of the February Revolution youth, and his companion Akram Hamid have been absent for nearly six years despite their relatives’ continuous appeal, while information suggests that they were liquidated in secret prisons of Islah.