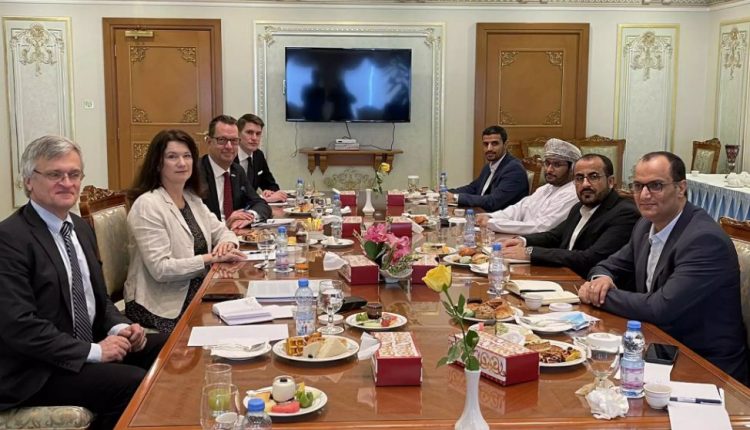 
As the Omani delegation left Sana’a, the American positions on the Yemen file witnessed a clear contradiction. What are the dimensions of these developments? Are they a reflection of Washington’s failure to exploit Oman’s relationship with Sana’a to pass its agenda? Or did Sana’a put forward a new vision to mix Washington’s cards in its new course in Yemen?

Washington was counting on its success by embarrassing Sana’a, given the relations it had with the Sultanate of Oman, which would eventually lead to pass the American proposals that originally aimed with the recognition of US State Department, to halt the progress in Marib or, more accurately, save its allies from an imminent defeat in their last strongholds in northern Yemen, or the other option that Sana’a reject the new Omani endeavor, which puts it in a confrontation with its last outlets to the world, and this was clear from the statements of the US envoy to Yemen prior to the arrival of the Omani delegation and his threat to tighten the siege on Sana’a, but Sana’a, which welcomed the Omani delegation and organized meetings for it with senior leaders and officials, according to Muhammad Abd al-Salam, head of the negotiating delegation, has put a serious vision that would lead to the security and stability of Yemen and its neighbors, in reference to understanding Omani fears from the repercussions of war continuation, This perception leads to address the humanitarian crisis that the Sultanate is working on, passing through other steps and arriving to the final solution.

This perception does not seem to please US, which hastened to move again through its envoy to Yemen, Tim Lenderking, who started his new movement through the European portal with a meeting with the French ambassador to Washington, passing through organizing meetings with the European Council with the participation of Saudi Foreign Minister Faisal bin Farhan, and they discussed the access of humanitarian aid to Yemen without obstacles.

During a meeting with the European Council the American envoy spoke on the need to stop the attack on Marib, in exchange for a total lifting to the siege and the opening Hodieda port of and Sana’a airport without restrictions.

This “carrot and stick” operation is part of America’s foreign policy, and it has previously used it in several places in its relations with Iran and even with its allies in Riyadh and Abu Dhabi, but this mixture does not seem to work in Yemen, as the leaders in Sana’a added the clause on the exit of foreign forces From all Yemeni lands, as a condition for engaging in a comprehensive cease-fire, This raised the concern of Washington, which preempted the recent statement of the Political Council in Sana’a through underestimating its military presence, and justifying it by fighting “terrorism” while also minimizing the impact of his support for the Saudi-UAE alliance, and mixed its cards, It is now between two options, either the exit of foreign forces from Yemen, including its forces that it redeployed after withdrawing it from Afghanistan and trying to camouflage it with small units deployed along the Yemeni coasts and cities under the control of the coalition, or accept the fait accompli and no longer find justification and argument to convince regional parties to market Washington’s proposals except to continue the escalation at one time and appeal to Sana’a at other times, hoping that this will be accompanied by Washington’s allies, who are still in an unenviable position in light of signs of political and military defeats.